What will be the finished Angela Merkel to keep Russian gas

Angela Merkel is facing perhaps the most difficult negotiations in his career. On Friday, she’ll try to convince Donald trump not to start a trade war against the EU and will defend the right to economic partnership with Russia, including on the project of the pipeline “Nord stream — 2”. Probably, for this she will have to make billions of dollars in trade concessions. 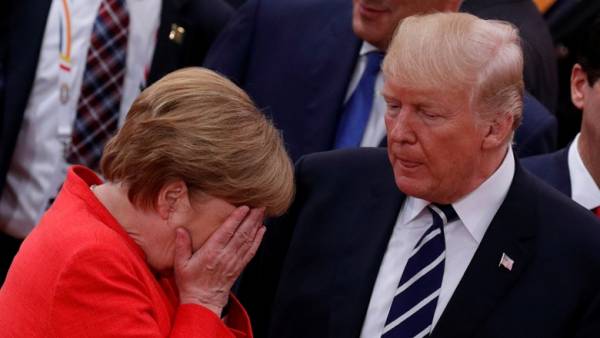 German Chancellor Angela Merkel goes to Washington, where it will be tough talks with the President of the United States Donald trump. Although the transatlantic voyage will last only one day (unlike the three-day visit of the French leader Emanuel Rules) to follow him, the world community will be equally closely.

“For me it will be one of the first trips I would do after re-election to the post of Chancellor. And this is for me a real need. We live in a time when there are differences of opinion, and of course, we will these differences be respected,” — said before Merkel during a meeting with the Macron.

It is expected that the attention of the heads of state focused on the development of business cooperation and prospects of the Transatlantic partnership. Earlier, the trump initiated the withdrawal from the agreement establishing a free trade zone between the US and the EU, arguing that the interests of his country.

Trump has repeatedly made it clear that global agreements, preferring bilateral cooperation and is willing to talk with each of the partners of the United States. Meanwhile, the EU insists on its principles of cooperation.

“The transatlantic partnership is important, even if there are differences in opinions,” said the Chancellor, stressing that “it is a great value, which I intend to maintain and preserve.”

Experts believe that one of the Central themes of the negotiations Merkel and trump will be the prospects of trade cooperation between the two countries. And in this vein, special attention will be given to the import duties on steel and aluminum in 25% and 10%, respectively, which the President of the United States imposed in March.

The EU this time for negotiations before may 1. The White house wants concessions in trade from the EU.

The U.S. is the largest trading partner of the European Union. According to Eurostat, in 2017, America had 16.9 per cent of the foreign trade turnover or 631 billion euros. In second place was China with €573 billion and Russia was fourth with €231 billion, 20% of European exports went to the United States, and 14% of imports came from this country.

States bought in the world of German goods — to €112 billion, according to the statistical service of Germany. The import from USA was far less — only $ 61 billion, So trump has a good reason to be unhappy with this imbalance.