The leader of North Korea went to summit with South Korea

DPRK leader Kim Jong UN left Pyongyang and went to the South of the demilitarized zone of Panmunjom, where he will meet with South Korean President mun Jae Otherwise. 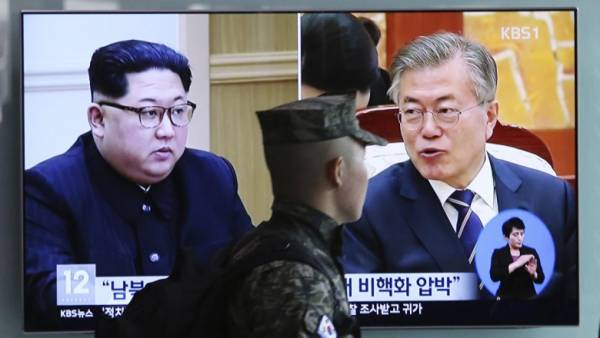 According to the Central Telegraph Agency of Korea (KCNA), North Korean leader “with an open heart to discuss” all issues concerning the improvement of inter-Korean relations and achieving peace on the Peninsula.

It is noted that Kim Jong-UN will announce the results of talks with his South Korean counterpart. This trip will be accompanied by his sister Kim yo-Jong, reports TASS.

The two leaders will meet at 10:30 local time (04:30 GMT) in the pavilion “House of peace” in the South the border point Panmunjom. Around noon, Kim Jong-UN and moon Jae-In planted pine as a symbol of reconciliation and relations between the two countries. The negotiations will conclude with a Banquet, which will begin at 18:30. The outcome of the summit a joint Declaration.

North Korea and U.S. are technically at a state of conflict since the Korean war of 1950-1953. Between them was signed only a ceasefire agreement, as Washington rejected all attempts of Pyongyang to conclude a Treaty of peace keeping in South Korea its troops, whose number now exceeds 28 million people.