The diplomat reported attempts by the U.S. to break into the residence of the Consul General of the Russian Federation

WASHINGTON, April 25. /Offset. TASS Dmitry Kirsanov/. U.S. officials are trying to open the door to the residence of the Consul General of Russia in Seattle (Washington), left on Tuesday at the request of Washington, but which is the property of the Russian side. This was reported to TASS by phone from Seattle, head of the consular Department of the Russian Embassy in the United States Nikolai Pukalov located at the scene. 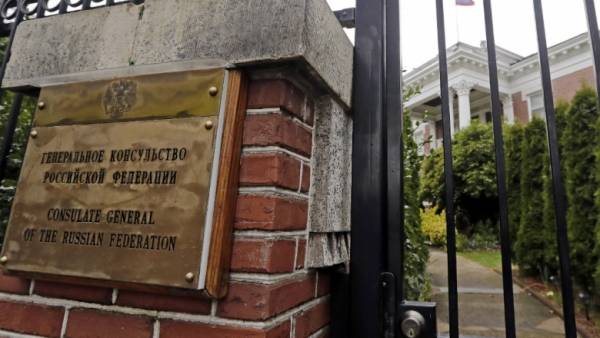 “We are now witnessing that the American side is trying, in violation of all of our diplomatic and consular conventions and its own legislation protecting the right to private property, to penetrate our territory, as evidenced by the attempt of breaking the lock of the entrance door on the territory [of the residence],” said Pukalov.

US special services are trying to enter Russian diplomatic property in Seattle pic.twitter.com/sRGCSDOZGD

The day before he told the TASS correspondent that the Russian diplomats have taken the archive and the most valuable equipment of the Consulate General in Seattle. The US administration has ordered to vacate the residence of the Consul General in Seattle, which is the property of Russia until the end of Tuesday.

“The residence is locked, the flag remained on the flagpole. [Identifying] the plate also remains in place,” said Pukalov.

US special services are trying to enter Russian diplomatic property in Seattle pic.twitter.com/nVlCaL3lTL

He said that Russian diplomats intend to keep on monitoring the issue of what is happening around the residence of the Consul General in Seattle. “Given what happened in San Francisco, we will see that this property will occur”, — said Pyalov. He was referring to the actions of the American side regarding the Consulate General of Russia in San Francisco (California), which also had previously been closed by order of Washington.