WASHINGTON, April 25 — RIA Novosti. The President of France Emmanuel macron on Wednesday, the last day of his state visit to the United States, delivered in Congress, where he explained the country’s position on a number of important international problems, including nuclear agreement with Iran. 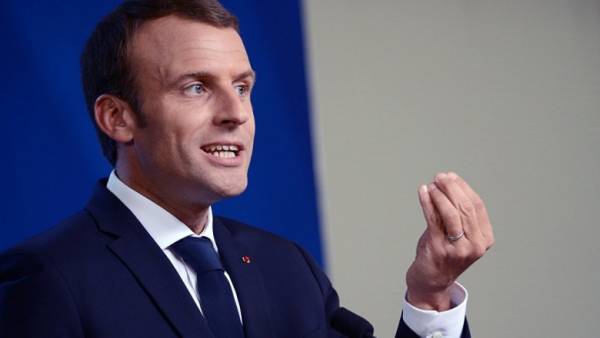 The performance was the result of diplomatic efforts of France to preserve the agreement, which has long threatened to withdraw the US President Donald trump. Judging by the violent and prolonged applause, Macron was able to convince the majority of Congress that the United States was wrong to abandon their obligations and withdraw from international agreements, with nothing in return.

About the reaction of the trump in this speech is still unknown, but the results of the negotiations with Macron American leader did not comment on his idea of formulating a new agreement with Iran. However, the state Department already said that the US goal is to stay in the nuclear deal for Iran to eliminate its shortcomings.

Much of his speech to Congress, the President of France expected described his long-standing and strong historical ties between the two countries, which originate from the time of independence the North American colonies from Britain in the eighteenth century. Of course, the Makron did not delve into how the decision of the French monarchy was connected with the struggle for the rights of freedom-loving American colonists, and how — with a desire to annoy the British Empire.

After a digression into history, the French leader moved to the description common to the two countries and the entire “civilized world” values, primarily democracy. There are some differences with the United States, he explained “family Affairs”.

The meaning of the introductory part was to prepare a skeptical against Iran audience to think about what to break the agreement with him is not worth it. The macron assured the congressmen that France was strongly opposed to Tehran ever acquiring nuclear weapons. In addition, he urged not to repeat “past mistakes in the region” and to respect the sovereignty of other countries, including Iran.

“We signed it (the agreement — ed.) on the initiative of the United States, we signed it together — the US and France. So we can’t just say that you should get rid of it,” said macron, speaking in the U.S. Congress.

“It is fair to say that the agreement does not eliminate all concerns, including the important. It’s true. But we should not leave him without something significant in return. This is my position”, — the President added.

“I do not share the fascination for new strong powers, the abandonment of freedom & the illusion of nationalism,” French Pres. Macron says. “Therefore, distinguished members of the Congress, let us put them aside, write our own history & a future we want.” https://t.co/qYf1rGxn0t pic.twitter.com/6oQI7ab8QP

Macron once again clarified that the new agreement will include four items: a lock of the Iranian nuclear programme up to 2025, a longer ban on any nuclear activity, the cessation of ballistic programs of Iran and creating conditions for political stability in the region. Based on this new agreement, according to the President, should be “full and comprehensive”.

“I think what we need right now to start working on a new comprehensive agreement and be confident that whatever the decision of the United States (old agreement — ed.), we will not allow the absence of rules will not allow the conflict of powers in the middle East, the deterioration of relations and potential war,” said macron.

Iran and “six” of international mediators (Russia, USA, UK, China, France, Germany) July 14, 2015 reaching an agreement on the settlement of the longstanding problem of the Iranian atom: adopted a Joint comprehensive plan of action, which takes Iran’s previously imposed economic and financial sanctions by the UN security Council, US and EU.

USA and the “European Troika” (Britain, France, Germany) have created in January the group to develop supplementary agreement to deal with Iran. This work started when the US President Donald trump once again extended the partial lifting of sanctions against Iran, but said that doing it one last time. The American leader has repeatedly expressed dissatisfaction with the prisoner in the summer of 2015 in the deal and threatened to quit if the agreement will not be able to “fix”. Its decision whether to extend the mode of lifting the sanctions or not, he promised to accept until may 12.

Wednesday at a press conference in Geneva, assistant Secretary of state for international security and nonproliferation Christopher Ford, commenting on the latest initiative of Macron, said that the US is not going to reconsider nuclear deal with Iran, but expect to develop additional agreements to it. “We’re just looking for a supplemental agreement, which will develop a series of additional rules and restrictions,” he said.

According to him, the US goal is to stay in the nuclear deal for Iran to eliminate its shortcomings.

Ford explained that the United States will remain in the AGREEMENT, but will continue to develop with its partners ways to transform provisional measures available under the nuclear deal, into something more sustainable.

State Department spokesman added that the shortcomings in the nuclear deal will help to achieve a sustainable solution to the nuclear issue on the Korean Peninsula, which did not happen with the current AGREEMENT. He noted that the deal with Iran needs to send a signal to the DPRK that the US is looking for and working to create good, structured transactions, which successfully and sustainably responds to the threats and where they are committed.

The reaction of the EU and the UN

In turn, the head of EU diplomacy Federica Mogherini on Wednesday said that the agreement with Iran remains unchanged.

“The agreement with Iran on the nuclear issue, remains in force and unchanged. It should still be executed”, — she told journalists on the sidelines of an international conference on Syria in Brussels.

Citing consultations with the French side, Mogherini stressed that the EU does not intend to revise signed in 2015 document.

“We are not talking about revising the agreement on the Iranian atom, which was signed by the various parties… the Question of holding new negotiations on the agreement should not… President macron said in Washington that the whole of Europe fully supports the implementation of the agreement,” she said.

Thus, in Europe, certainly against the new negotiation under the old agreement, but has not yet decided on the issue of negotiations on the new agreement, which said macron.

For its part the UN has also noted the important role of prisoners in the 2015 agreement on Iran’s nuclear program to regional security.

“The Secretary-General has repeatedly said that it considers the Joint comprehensive plan of action as a major diplomatic achievement, which should remain in force. SVPD was also supported by the UN Security Council in resolution 2231”, — told reporters the official representative of the UN Secretary General Stefan Dyuzharrik.

In Moscow was initially opposed to the revision of the outcome of the agreement with Iran, which were the result of a complex consensus of all parties. In addition, Russia, as one of the parties to the agreement, could not please and desire trump to resolve all issues with the European allies without the participation of Russia and China.

“We stand for preserving the AGREEMENT in its current form, and we believe that while there is no alternative, it was repeatedly stated at various levels”, — said the press Secretary of the President Dmitry Peskov told reporters.

In turn, Deputy foreign Minister Sergei Ryabkov said RIA Novosti that Moscow had not received any invitations to participate in the hypothetical negotiations for a new agreement with Iran on its nuclear program.

“We are no invitations were not received. And it is impossible to comment on what in fact not. Not less significant aspect is that public comments that we heard from Washington in different aspects, different interpretations do not coincide with each other. That is, they speak on the same subject in different moments of time is not absolutely identical to what was said before and what was said after that,” said Ryabkov.

He also stressed that Moscow does not consider itself bound by any “separate agreements” that reach the US and “eurotroika” a Joint comprehensive plan of action (SVPD) on Iran.

“Now the just is no subject for a more in-depth evaluations of this… When we will understand what kind of agreement, what they are, then we will separately watch the content side and that is also very important to look at it through the prism of the UN security Council resolution 2231” — said Ryabkov.

The main thing is that Moscow is concerned about the possible consequences of the revision of the AGREEMENT for the entire international system of nuclear non-proliferation.

“For us, this raises a whole series, to put it mildly, questions, and to put it bluntly, serious problems and difficulties. The main one is that AGREEMENT that the international community is not just a good service as a tool for stabilizing and strengthening the nonproliferation regime, but also as an example of the possibility in a balanced compromise to address the most complex and intricate problems. Now that agreement is in question, his fate is vague,” said Ryabkov.

The Reaction Of Iran

In Iran in connection with the new stage of the discussion SVPD has again pointed to the fact that most of the positions on the Iranian atom affected the United States, as the world will lose confidence in them.

“If America will come out of SPUD, then it will suffer because it will lose the trust of the world. If a specific government, an agreement was concluded, and after some time came a new government, it is illogical to assume that it could derail the commitment. America will suffer in the first place, because the world will not be able to rely on the cooperation with the authorities of this country,” he told RIA Novosti adviser to the Minister of foreign Affairs of Iran Hossein Sheikh al-Islam.

Characteristically, the words of the Iranian representative to the danger of loss of United States credibility in the international arena resonate with the words of the President of France that you can’t just “get rid of the agreement,” which is a signature.

The Secretary of the Supreme national security Council of Iran Ali Shamkhani warned that the country is in the event of a US withdrawal from the nuclear deal will resume a previously stopped nuclear facilities. “It (the decision of the United States — ed.) will be important for international security as a whole,” said Shamkhani.

This is confirmed by the adviser to the Iranian foreign Minister, who repeated the words of the Minister of foreign Affairs Mohammad Javad Zarif that the country will come from the transaction in the case of the exit of the United States. “But I don’t think USA will come out of this agreement,” — said the diplomat.

With this prediction the day before had been unanimous and oil traders. So, oil prices moved to lower Tuesday night after trump and macron discussed Iran and the latter announced the preservation AGREEMENT until the new agreement.

It is obvious that now, after the diplomatic trick of France, his word should say trump, the mood of which in international Affairs is akin to the fluctuation of oil prices.