Fox: Bolton warned about the impending update of the national security Council the White house

NEW YORK, April 26. /TASS/. New assistant to the President of the United States Donald trump on national security John Bolton warned of the inevitable reorganization and updating of the national security Council (NSC) of the White house. 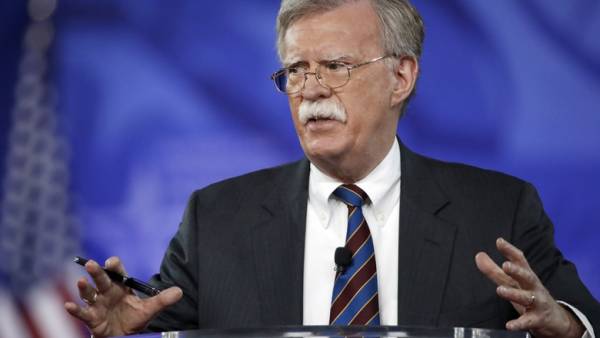 This was announced on Wednesday, the Fox News channel, citing sources in the administration trump.

According to them, on Wednesday morning, Bolton distributed an internal circular informing staff of the NSS that the upcoming personnel changes in particular will involve a combination of duties, the heads of several departments in the hands of one official.

It is not excluded that the most experienced employees of the SNB will have to leave their posts. This measure is in principle complicate the task of finding a decent replacement for them, said the source of the channel.

Bolton is the third assistant to the President for national security within 15 months of the presidency of the trump. Its predecessors were Herbert McMaster and Michael Flynn. The latter resigned in February 2017.

On 22 March, the President of the United States Donald trump in his Twitter announced the resignation of Herbert McMaster as assistant to the President for national security. On 7 April he took John Bolton, a lawyer by education, 2001 to 2005 held the position of assistant Secretary of state for arms control and international security. Commenting on the decision of trump, former US President Jimmy Carter called it “one of the biggest mistakes” committed by the current chief of staff. According to Carter, Bolton “stands for war against North Korea for attack on Iran” and is “one of the key figures that influenced the decision to invade” in 2003 in Iraq.