Contractors have completed the paving of a bridge to Crimea 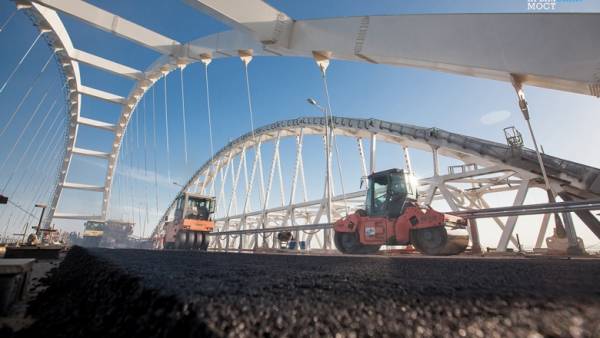 In the final stage

According to Ruzankina stacked coverage “durable and safe” the builders began the test surfaces of the different sections of the bridge.

“Collected and processed data to a monitoring system that controls the operation of the bridge. First, we surveyed all support a fully built road, all the superstructure. Now on selected plots, including those in the fairway, give the maximum load, removed strain indicators”, — he added.

The project is under completion and improvement of highways. According to the chief of the capital construction Department of fku uprdor “black sea” Eugene michalko, in may will launch a movement on the part of Krasnodar region — while excluding the interchanges, but with the possibility of reversal on the 34-kilometer road.

“In an advanced stage of work on the device and noise barrier fencing, construction, landscaping and road markings,” said Mikhalkov.

He stressed that the design and construction of autopatched went with all environmental requirements.

“For the installation of noise screens played the role of several factors. It is the area of the prospective construction of the settlement the village of Taman. This includes ensuring the aesthetic perception of road users, and minimizing damage to the environment in the form of death of birds. Fences slightly darkened to migratory birds did not fight about them”, — said Mikhalkov.

According to him, the road was paved most optimal way, minimizing the impact on the environment and archaeological heritage. He said that the capacity of the road will amount to 36 thousand cars per day.

Another inspection point in the press tour for journalists of Federal mass media — the base operation of the bridge. “This base was built specifically to accommodate all services for the safe operation of the bridge and approaches. The second floor of a three storey office building is the dispatch center for production management”, — said the representative of the customer of building of the bridge head of fku uprdor “Taman”, Roman Novikov.