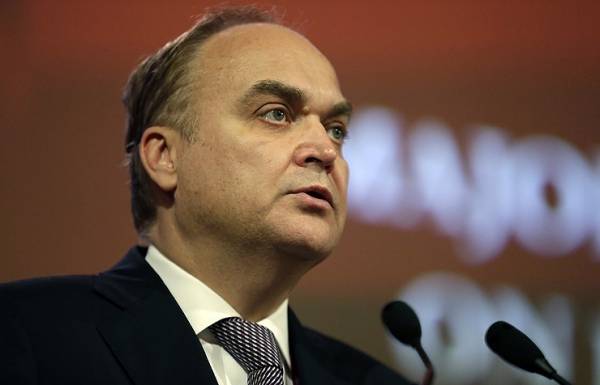 WASHINGTON, April 26. /TASS/. Actions by the United States against Russian diplomatic property in Seattle on Wednesday, unfriendly, unhelpful and anti-Russian. This opinion was expressed by Russia’s Ambassador to the U.S. Anatoly Antonov in an interview with reporters.

“Today, the us government broke the lock from the building where lived the Consul General of Russia in Seattle. They went in violation of all international conventions, and all agreements. In addition to the sadness and sorrow this gesture did not cause,” he said.

Antonov believes that the issues raised in the media noise around the expelled Russian diplomats is intended to divert attention from the actions of US authorities against Russian diplomatic property in Seattle.

“In order to distract the international public, us media, Russian media from this tyranny, which is watched online in Seattle, now suddenly flared up some hysteria in the media of the United States, when they began to defame the Russian diplomats who were expelled from the territory of the United States of America,” he said.

On Tuesday afternoon, Russian diplomats – employees of closed at the request of the US Consulate General of the Russian Federation in Seattle left the city. As reported in an interview with TASS, the Consul Halit Aisin, had left the city a total of 23 people – diplomats and members of their families – 11 machines. The column was moving to Washington. Access to the room where the Russian Consulate General, were discontinued at the request of the American authorities at midnight on 1 April.