Against the backdrop of mass protests in Armenia is a growing tension on line of contact in Karabakh. The parties to the conflict exchanged mutual accusations of provocations, though, and keep a mindset for peace negotiations. 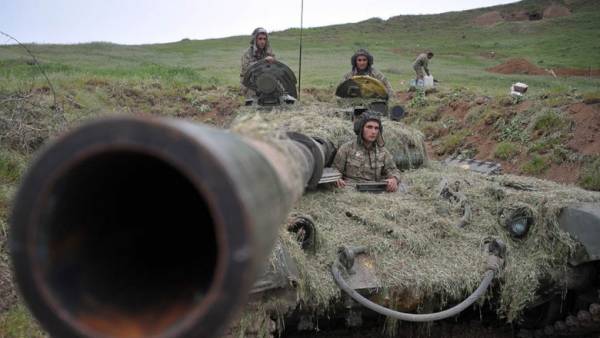 How can the development of the situation in Nagorno-Karabakh after the resignation of the Prime Minister of Armenia Serzh Sargsyan, to understand “Газета.Ru”.

Protests in Armenia coincided with the growing tension on line of contact in Karabakh. Over the past few days, the defense Ministry of the unrecognized Nagorno-Karabakh Republic States that Azerbaijan tightens to the contact line military equipment. Each message is accompanied by videos, which depicted the movement of manpower and equipment.

Such action was expected and fully fit into the tactics employed by the military and political leadership in Baku.The message of the Karabakh defense Ministry

In response Baku accuses Yerevan of violating the ceasefire, and published in the Armenian media video accumulations of military equipment called a provocation. “Seriously concerned by mass unrest in the country’s military-political regime of Armenia by spreading such reports, continues to keep the Armenian people in a state of fear”, — stated in the defense Ministry of Azerbaijan.

After the resignation of the Prime Minister of Armenia Serzh Sargsyan and his government, the foreign Ministry of Azerbaijan said that Baku is ready to “continue negotiations with sane political forces in Armenia for the soonest resolution of the Nagorno-Karabakh conflict peacefully”.

However, according to the Deputy Director of the Center for analysis of strategies and technologies Konstantin Makiyenko, the probability of the next transition of the conflict into a hot stage is always preserved.

The Azerbaijanis have so large military-technical superiority that the temptation to test it is always there. And exacerbation of the internal political situation in Armenia, the probability that Baku will not resist this temptation increases. Previous incidents it is known that Azerbaijan has stepped up its military preparations in moments of domestic political crisis in Armenia.Konstantin Makercontinental of the Center for analysis of strategies and technologies

Makienko was reminded of the last major protests in Armenia — “electromaidan”. Then residents of the country EN masse took to the streets due to a substantial increase in electricity tariffs. The protests, which began on 17 June 2015, ended only by the end of September.

While the attention of the Armenian authorities focused on domestic issues, the Ministry of defense of Azerbaijan in August 2015 published signed by defence Minister Zakir Hasanov address, which begins with the words “All personnel of the Armed forces living thoughts of revenge and victory, is ready and able to fulfill their sacred duty to liberate our occupied lands.”

Just below explained: the time has come to regain control of Baku to the towns and villages that are now controlled by the unrecognized Nagorno-Karabakh Republic.

After this exchange of bellicose statements from the ministries of defense of Armenia, Azerbaijan and Nagorno-Karabakh has intensified. At the end of September of the same year at Armenian positions for the first time since the signing of the armistice in 1994, fire was opened from artillery systems of the MLRS, the 122 mm D-30 howitzers, mortars. Also used rocket-propelled grenades and small arms. A few months later, in early April 2016, the conflict has escalated to armed clashes on the line of contact in Nagorno Karabakh, which became known as the “four-day war”.

A bilateral agreement on ceasefire along the line of contact of Karabakh and Azeri military forces was reached April 5, 2016 at the meeting of chiefs of General staff of Armenia and Azerbaijan in Moscow.

On the other hand, according to the expert, the existence of such precedents does not mean that a similar scenario will be implemented again in the current situation.