MOSCOW, 24 APR — RAPE. The international Centre of the Roerichs (ICR) has appealed to the Investigative Committee of the Russian Federation with a request to bring to criminal responsibility of the Minister of culture Vladimir Medinsky, his first Deputy Vladimir Aristarkhova and other persons to criminal liability in the case of the theft of art objects, the press service of the institution. 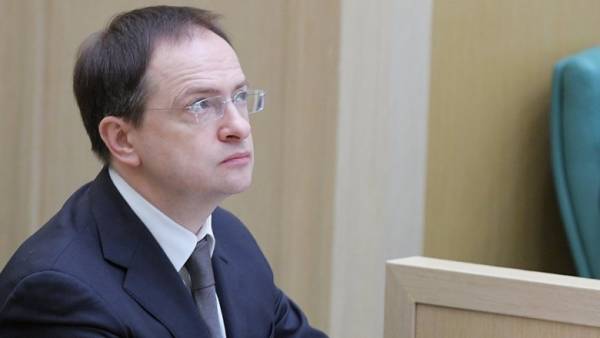 It is noted that the reason was “robbery committed by an organized group, in especially large size with illegal penetration into premises and with threat of application of violence, harmless for life and health”.

From the press release it follows that the offense resulted in “organized an unprecedented capture the unique cultural values and multibillion-dollar cost of the Roerich heritage, belonging to the ICR”.

According to the press service of the institution were stolen 5910 items, including 728 of paintings and drawings, and 8810 items a handwritten archive of the Roerichs, the national treasure of Russia. The property has a multi-billion dollar estimated cost. It is specified that the kidnapping was committed in the night from 28 to 29 April 2017: the building of the Lopukhins ‘ Estate, which housed the ICR, was captured by unknown assailants. The next day in the facility were searched, after which the building of the Museum with many thousands of units have been deposited with the Director of the State Museum of Oriental art (SMOA), Alexander Sedov.

As noted in the documents submitted to SK, the actions of an organized group by obtaining property of the ICR began after complaints Medinsky, Russian President Vladimir Putin. In it the Minister reported about the alleged risks of loss of the Roerich heritage in the ICR.

In addition, the statement highlights the alleged active participation in the activities of an organized group of adviser to the Minister of culture Cyril Fisherman, who in the course of searches in the ICR gave the investigation recommendations for the removal of certain cultural values. In addition, according to the Center, in this case, the involved other officials, as well as a lawyer.

“For nearly a year named entities avoid liability, although they pointedly cynical and infinitely ruined Russia’s largest public Museum and the ICR was deprived of almost all property under the guise of references to “state interests”, — stated in the statement. In the opinion of the institution, such actions “are an open theft of property” and must be qualified RF IC.

In turn, the Ministry of culture with the claims of the ICR disagrees. According to authorities, the Moscow city court refused to satisfy the request of the Centre on recognition of the fact of accepting the inheritance of Svetoslav Roerich. The decision of the court institution is not a successor of Svetoslav Roerich.

“It is the activity of the State Museum of the Orient is the fulfillment of the will of the Roerichs in the promotion of their heritage in order that it was open to everyone, all available to the idea of the Roerichs, the idea of the Covenant of peace and his other insight was known to all mankind, not only in Russia,” — said the Deputy Minister Aristarkhov.

According to officials, if the differences of GMV and ICR must agree to cooperate, as it would maintain the collection and make it accessible to everyone, and applicable law in this case would not be violated. The Deputy Minister stressed the importance of the Center, located in the building in Maly Znamensky lane, was retained “to work, which was conducted by the founders of the Museum, was continued and we are taking all possible efforts.”