Victims of a collision of a minivan into pedestrians in Toronto have become 10 people. Another 15 were injured. The police believe the actions of the arrested driver, 25-year-old Alika Minassian, deliberate, and tend to the version about the attack. His motives are unknown. The tragedy occurred on the background of passing in the meetings of foreign Ministers and of the Ministry of internal Affairs of the G7 countries. 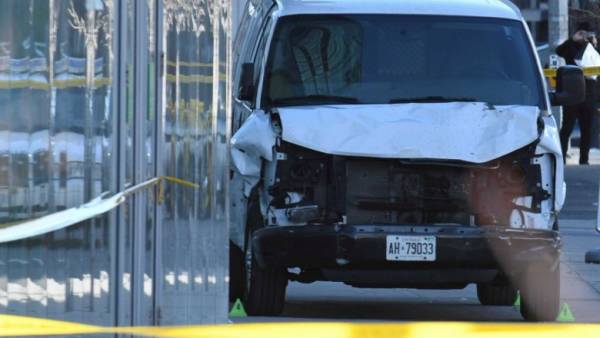 According to recent reports, the death toll for pedestrians in Toronto, Canada has grown to 10 employees. The number of wounded is 15 persons, from them five are in a critical condition. Among the wounded were three citizens of South Korea.

The incident occurred on the outskirts of the city on a busy street Yong on Monday around 13:00 local time (20:00 Moscow time). Called the police, eyewitnesses reported that a white van suddenly drove onto the sidewalk at high speed began to push people, knock down fire hydrants, RAM benches and stalls. The driver was moving in a zigzag, and stop was able to drive half a kilometer.

The witnesses of the tragedy lead to the shocking details. Ali Shaker was driving down the street when he noticed a white van on the sidewalk. “He just knocked people over and it was a nightmare. I thought he had a heart attack or something and tried to chase him”, — quotes its words CTVnews. Pretty quickly he realized that the driver everything is fine — the van at speeds of about 70 km/h has continued to confuse people.

[NYT] A man drove a white van onto the sidewalk along Toronto’s main road and struck multiple people:https://t.co/y4uQ5UGL4k pic.twitter.com/iklJs3QOZP

“I’ve never seen anything like it. I couldn’t believe my eyes — so terrible everything was. Downed people, their blood across the street, someone dropped the demolished mailbox”, — he shared some experiences.

Another witness, Kenneth Wu also passed when I saw running man and woman. Then appeared a white van coming right at him. “The driver looked at me, he tried to tackle me, I stepped back. He then turned left, where he hit an old lady. She flew up, fell to the ground… and then hit another guy and continued movement”, — the eyewitness reported.

Wu has no doubt that the driver acted intentionally. “He moved people like aiming at them,” Wu said, noting that he can’t forget the picture of the blood-stained streets.

The driver managed to stall half an hour after contacting the police. Local media said his name — a 25-year-old Alex Minassian, never consisted on the account in police. He lives not far from the place of incident in a North Toronto suburb of Richmond hill. His LinkedIn profile States that he is a student in Seneca College.

There were reports saying that the Toronto Alek Minassian driving suspect was a “dark skinned man”… And this is an alleged photo of him. So this is “dark skinned”? pic.twitter.com/qKhJ5cFqIA

The motive is unknown, and their publicity unique version of the incident the local security forces there. It is also not clear whether or not there was Minassian accomplices. Their assistance in the investigation of the impact Canadians have already offered the US authorities.

The chief of police of Toronto mark Saunders evaded a definite answer to the question of journalists, whether the incident a terrorist attack, noting that it is too early to draw conclusions.

This video of the Toronto incident appears to be the arrest of driver of the white Ryder rental van, at “Emerald Park” condos, south-west of Yonge and Sheppard.

Earlier, the head of the Ministry of public safety Canada Ralph Godal stressed that “the suspect is not connected with any organized terrorist group and not a major threat to national security.” These days the town hosts dignitaries. The meeting of foreign Ministers of the G7 took place in Toronto from 22 to 23 April. On April 23-24 there are talks of the Ministers of interior and security. According to Gudal, the authorities had no information that the summit can become a victim of a terrorist attack.

The police set up two hotlines: one for members of the families of the victims, and another for gathering information about the incident from witnesses.

#PHOTOS: Arrest of suspect in hit & run in #Toronto at #YongeandFinch appeared to have pulled weapon after being stopped by police. Suspect in custody w/o incident. #680News pic.twitter.com/kaVrvwKglU

Despite the caution in the wording with officials, locals and the media referred to the incident a terrorist attack.

Recall. the Islamic terrorist group in recent times are increasingly using trucks as weapons. Notoriety in 2016 received the attacks in nice and Berlin, which took place over a similar incident in Toronto scenario. In total they killed about 100 people.