Published on the website of public procurement Annex to the contract for preliminary design of Russian super-heavy launch partially confirmed already known information, and partly brought new. “The attic” had studied the document to find out what will be the new Russian shortage and that in this regard we can say about its purported mission.

As is clear from the document, design of Russian super-heavy rocket will be reusable. And that means it can be used only in government projects, where you don’t need commercial competitiveness. Rocket, the first launch which may happen in the year 2028, it seems well suited to service the circumlunar station, the establishment of which took the United States at the trump.

On the one hand, this is good — clearly “non-commercial” rocket will not experience pressure from SpaceX. On the other — it turns out that the presence or absence of real problems for domestic shortage depends only on the desire of the US to invest in the lunar station. History teaches us that from the time of the NASA lunar program almost never brought to the end of their manned projects. Accordingly, the new Russian missile risks to remain without work if the Americans he would change his mind.

Why our shortage cannot be even partially reusable?

From the application to the contract shows that super-heavy rocket will be created from the blocks in the middle of the rocket “Soyuz-5”, a study which recently started RSC Energia. The first flight of “Soyuz-5” is scheduled for 2022. Technically, this missile, which would orbit 18 tons, it will be a simplified version of the Soviet “Zenith”. 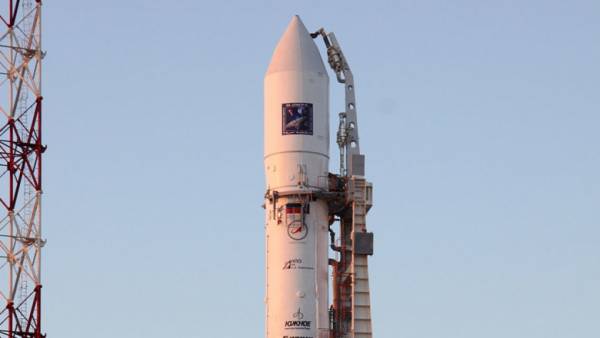 In particular, the engine of its first stage, RD-171МВ is, in fact, simplified the RD-171 first stage of “Zenit”, not only chokes the start of the oxidant (oxygen). Due to this, it becomes less able to control the thrust, but five percent more power; easier and safer getting the engine design. The manufacturer, respectively, of the hopes thus to reduce the engine price by 15-20 percent relative to the “zenitovskogo” RD-171.

This means that the launch shortage of the “package” soyuzovskie stages will cost several hundred million dollars — the cost shortage cannot be reduced to a simple sum of the value of its elements, their Assembly will require a variety of unique works by pairing, which raise the unit cost by tens of percent.

And like all good: because right now we have no shortage, and here we have one. And not on the basis of “Angara”, which at $ 100 million apiece, and presumably cheaper “Soyuz-5”. But there is one “but”. As you know, today the Russian launch vehicles in the commercial market are present in small amounts — they were replaced a cheaper Falcon 9 rocket. One of the strengths of the American missiles — the ability to reuse the most expensive part of it — the first stage.

While it saves SpaceX about 10 percent of the cost of each start, but after implementation of the last modification to the Falcon 9 Block 5 will save up to 30 percent.

And “Soyuz-5” and created on its basis swertz this way I can’t. The reason is quite simple — oxygen-nattily RD-171МВ (naphthyl, C12,79H24,52 — hydrocarbon fuel introduced because of declining oil production, suitable for the manufacture of rocket kerosene) in the first stage of “Soyuz-5” just one, and Falcon 9 the first stage — nine of the weaker engines. For landing rockets on the tail is better suited a few engines with less than one more powerful.

The fact that modern rocket engines can vary cravings in moderation. Easy to get full power, but it is difficult to achieve very small. While the rocket flew once, everything was fine — even the weight of the rocket with fuel is that there is a five percent power is not needed, they do in the space is not output.

Different story with the salvation stage. When it sits, fuel is small, almost all left for the payload. The stage itself is very easy. If the “pinch” the engine thrust, the rocket just won’t sit down, and when the fuel runs out will fall like a rock. Well, when, as the Falcon 9, with nine engines cut off the part and sit down. If one, like the Soviet “Zenith” and its descendant “Soyuz-5” — to do it will be much more difficult.

In addition, the RD-171 from the outset, a simplified control system nozzles, which further complicates the landing on the tail. Not in the design of the “Soyuz-5” to “legs” — supports, without which the missile on the tail not to put.

Shortage will be collected on the basis of the first stages of “Soyuz-5” — just as the Falcon Heavy is based on the first three stages of Falcon 9.

If “bricks” are disposable, and the house of them will be disposable.

The lack of mnogorazovogo in the project is evident from the fact that the Annex to the contract describes in detail the requirements for the security of falling levels of heavy missiles, but does not detail the issues of their fitness for salvation.

The lack of mnogorazovogo tells us about the aims of the project?

Domestic super-heavy rocket, according to available documents, will fly no earlier than 2028. This could create a risk of competing with the Falcon Heavy reusable and potentially cheaper. However, in reality they are small. By the time SpaceX intends to replace the Falcon Heavy, with regard to its obsolescence, more powerful and cheaper (per kg load) rocket BFR.

From this it is clear that the commercial market Russian shortage hardly anyone will target. If Airliners fly the same company once, and the other lot, the first company tickets will be too expensive for commercial shipping. Rocket SpaceX replaced the Russian “Proton” from the market even in the disposable version, and there is no reason to assume that in the competition with their reusable superheavy descendants that will change.

However, there is an industry that is “immune” to expensive launches public — space projects. Last year NASA was very hard on the project of a lunar station. The reason for this interest in this program, NASA is simple — the Agency by the early 2020s, will finish his rocket, the SLS, which will be the most powerful in the world. The flights to the moon NASA enough money not to give, and to fly on SLS to ISS will not work — the SLS is 10 times more expensive than the Falcon Heavy. It would be impossible to explain to a taxpayer why fly for the money, if there is a way cheaper.

Of course, the Falcon Heavy can deliver the modules to the lunar station and it will also be cheaper. But here is NASA in a better position, the taxpayer is not aware of the intricacies of the capabilities of the Falcon Heavy, so the Deputy head of NASA, William Gerstenmaier is already a disinformation campaign, publicly claiming that SLS can deliver the modules for the new station, and the SpaceX rocket — no.

It is, of course, has already been accused of distorting the facts, but this is not so important as to vote for funding for SLS will be in Congress, and there still do not read Newspapers.

Roscosmos very quickly joined this very useful for his project. The Soviet-era private manned space programs we have, because they require serious funding. Therefore, for our country the only real chance for notable manned activity in space is the participation in the international project. Already last fall, the head of Roscosmos Igor Komarov signed with the NASA representative a statement of intent to cooperate on a lunar station.

This is a great step, the benefit of other grounds for the financing of manned programs we have not yet foreseen. But such cooperation requires that Russia had a missile capable of reaching lunar orbit with an advanced space ship in the Federation (over 15 tons). According to the Annex to the contract for the design of the new Russian shortage, about this weight category — up to 20 tonnes to lunar orbit and planned capabilities of the future Russian shortage.

So, as we can see, our super-heavy rocket is not just intended disposable. Because the lunar station, often fly no sense. First, the gravity there is almost no different from the weightlessness on the ISS, that is a lot of new experiments do not deliver. Second, the price of shipping cargo and people for 400 000 kilometers (lunar orbit) is much higher than 400 km (ISS orbit).

In the third — and most important — the Moon is outside the magnetic field of the Earth. Radiation outside of this field of 0.66 of a sievert per year. The maximum dose for astronaut standards as NASA and Roscosmos — 0.5 SV per year. On the moon’s surface radiation levels below two times, and Mars — three.

That is, the lunar station is the most deadly place ever offered to the people in the history of space exploration.

Therefore, the representatives of national space agencies have repeatedly explained that the station is likely to be visited periodically and not permanently inhabited. That is to fly there must be rare and won’t stay too long. And for the occasional flights of reusable rocket is not needed. If they are going to fly many times, the new missiles will do so rarely, that there is a real chance of loss of skills for their production.

Thus, it is necessary to acknowledge that the project of the Russian swertia looks in all respects a thoughtful and well suited to the task. He will be able to demonstrate the Russian flag in space on the borders, who undertook to conquer the Americans. This is a great project, for which the Russian space Agency deserves the highest praise.

So historically, the leadership of the industry, followed by the country as a whole — there is no understanding of why you might need Swartz out of prestigious international projects. Accordingly, viewed as the only customer of our shortage is NASA involved in their project circumlunar station, while our only real chance to get a super-heavy rocket.

Why is it risky?

With all the advantages of domestic orientation swertia to participate in the American project Deep Space Gateway, it has a serious drawback. The fact that the space Agency in the United States depends on the election cycle in this country. In recent decades each new President wants to earn fashion points by announcing a new, “unseen” space project.

It can be anything — SDI Reagan, the return to the moon Bush, plan to capture an asteroid Obama or, for example, the creation of a lunar station in the age of trump. To accomplish all this not only necessarily, but also not necessary. More than eight years, no President in the US government will not be and implemented without super really big space project in eight years, still will not work.