MOSCOW, 19 Jul — RIA Novosti. Thursday marks 75 years since the creation of the legendary body of state security of the USSR, the military counterintelligence “SMERSH”, which is considered perhaps the most effective secret service during the great Patriotic war, who made an invaluable contribution to the victory. 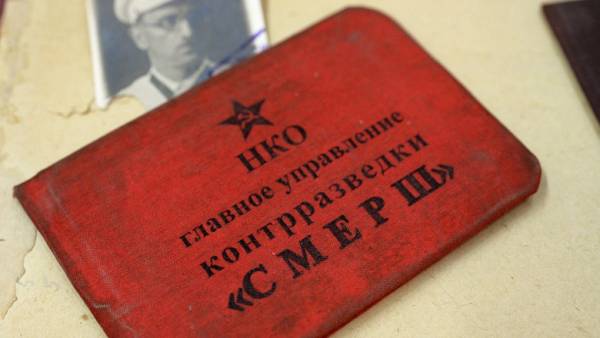 According to historians of intelligence agencies, the main achievement of the counterintelligence “SMERSH” is that none of the operations of the red Army was not disrupted because of the actions of hostile intelligence services. Neither the strategic plan of the Soviet command became known to the enemy. In addition, there has not been any anti-Soviet statements or in the ranks of the red Army, nor in its rear, so was hoping for in Germany.

In fact, through the establishment of “SMERSH” in the Soviet Union in the war was a carefully structured working system of resistance to the mechanism of intelligence and sabotage created by the Nazis and for many years honed in different countries.

The creation of the “SMERSH” in the spring of 1943 was dictated by events by the time the great Patriotic war. First of all, it was about changing the strategic situation in favor of the red Army. It was clear that now she will go ahead and release previously captured by the Wehrmacht in parts of the country.

But the German secret services are already managed by the time to create in the occupied territories not only their bodies, including special schools, subversive centers, and its network of agents. This created a threat of terrorist attacks and sabotage in the rear of the red Army, which could disrupt or at least slow its offensive.

Another argument in favor of creating the new structure was, according to historians of intelligence agencies, the need for rapid information transmission about the state of Affairs in the army, especially during the preparation and conduct of major operations, directly from military intelligence to the Chairman of the State Committee of defense of the USSR, people’s Commissar of defense Joseph Stalin.

The creation of a new body was under the direct control of Stalin. Before he had various options for the reorganization of military intelligence, but the head of state has not approved a single one of them. According to historians of the intelligence services, Stalin understood that in the current conditions it is impossible to separate the leadership of the red Army and state security bodies.

A curious story of the name “SMERSH”. Before making a final decision on the creation of a new structure the first Deputy people’s Commissar of internal Affairs Vsevolod Merkulov suggested to call it “Serins”, which was glossed as “Death to foreign spies”. But Stalin corrected this phrase, removing the word “foreign”, and it was the right decision, because counterintelligence had to work not only against the intelligence services of Germany and its satellites (Romania, Hungary, Finland and other), but against the bandit underground in the Ukraine, the Baltic States and in the North Caucasus.

The main tasks of the “SMERSH” began the struggle against espionage, sabotage, terrorist and other activity of foreign intelligence services in the units and institutions of the red Army; ensuring the tightness of the front line for spies and intelligence agents of the enemy; preventing betrayal and treason in units and institutions of the army, desertion and mutilation on the fronts; filtration inspection of troops and other persons who were in captivity and surrounded by the enemy.

In addition, the “SMERSH” had time to identify the facts that could have a negative impact on the conduct of military operations, including deficiencies in the planning of military operations and also in ensuring the existing units of the army and Navy equipment, weapons, food and uniforms.To neutralize the saboteurs

High performance “SMERSH” to neutralize enemy spies, saboteurs and agents say are the numbers: if to the middle of the great Patriotic war in the front line military counterintelligence detected and detained up to 60% of these persons, by 1945 that number had increased to 85%. Of course, this does not mean that the rest of the agents have reached the goals, just the “SMERSH” was the primary “sieve” to catch them, after which in effect counterintelligence in the rear of the Soviet troops.

Most vividly about this job “SMERSH” is told in is considered by experts the best book on military counterintelligence “the Moment of truth (In August, forty-four…)”, written by Vladimir Bogomolov.

As the Red Army in 1944-1945 conducted one offensive operation after another, in its rear remained of the reconnaissance and sabotage residency, the enemy, and they support the armed groups of nationalists. They became, in fact, a new opponent for smershevtsev.

From the beginning of may 1945, front-line management “SMERSH” were intelligence and counterintelligence work and in the liberated territories of Germany, Poland, Czechoslovakia, Hungary, Romania and Bulgaria.