France does not understand US. As macron argued with trump

The President of France Emmanuel Makron and the US administration entered into a polemic. Closest allies arguing about the date for the withdrawal of American troops from Syria. 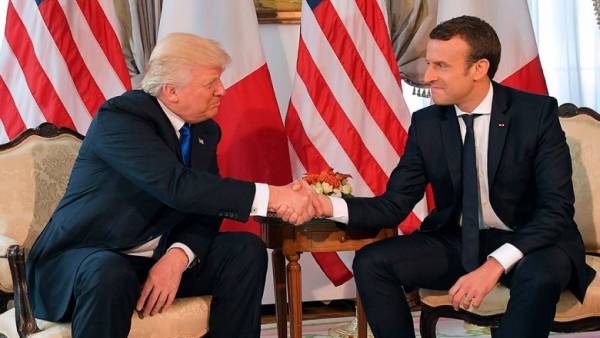 A few hours from the White house came a denial. Washington continues to insist on the imminent departure of its military and complain that the middle East is too expensive.

“Better we spend on myself”

Differences between France and the United States emerged after only a day after a joint air strikes inflicted by these countries and the UK on military targets in Syria. Washington, Paris and London accuse Damascus of a chemical attack against civilians in the city Duma. Power state of the middle East deny everything.

Shortly before the strike on Syria, Donald trump announced that he intends in the foreseeable future to withdraw two thousand troops deployed for military operations against ISIS*. The reason is excessive spending, which Washington had to go due to a succession of wars in the middle East.

We have not learned from this no benefit. Just imagine, spent seven billion dollars over 17 years. Not received in exchange nothing but death and destruction. It’s awful. It’s time to withdraw troops.Donald Trepresent USA

The American leader saw a connection between unresolved internal problems and the continued intervention in Syria.

Washington’s allies in NATO reacted to it without enthusiasm. To replace the Americans in Syria, no one. To send troops to the conflict zone a few weeks ago refused France. The delegation of the Syrian Kurds announced that President macron promised to place the French infantry on the border with Turkey, at the Elysee Palace have not confirmed this.

“France and Britain can’t replace Americans in the middle East. After the First world war Syria was a mandated territory administered by Paris. Arab society is extremely negative about the return of the French troops. Immediately would start talking about a new round of colonialism”, — commented in an interview with RIA Novosti, the political scientist, the Deputy Director of the Center for political technologies, Alexei Makarkin.