MOSCOW, 16 APR — RIA Novosti. The Commissioner for human rights in Russia Tatiana Moskalkova at a meeting with Russian President Vladimir Putin on Monday congratulated him on his re-election as President and wished good team, a good “rear” and happiness in his personal life. 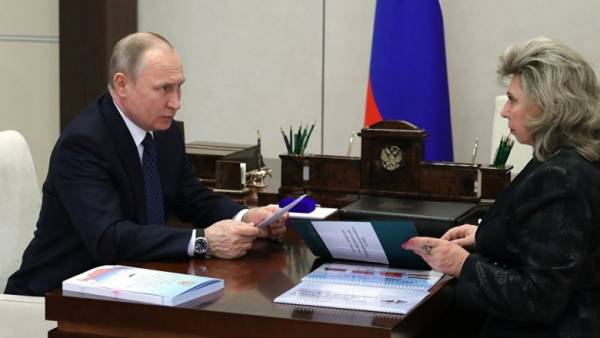 On Monday, the Ombudsman has presented to Putin his annual report on the activities in the field of human rights protection, according to the Kremlin website.

I would like to first congratulate you on your election to the post of President on behalf of all commissioners for human rights in constituent entities of the Russian Federation, from our experts and wish you strength of spirit, and — as the guarantor of the Constitution and human rights forces in strengthening democracy, justice and the law.Tatiana Moskalkova

“And of course, a strong team, happiness in personal life, a good “rear”,” — added the Commissioner.

The vote in the presidential elections in Russia held on March 18. The turnout was 67,54%. Acting President Vladimir Putin won with a score of 76,69% of the votes for him, according to the final data of the CEC, voted more than 56,4 million voters.