United States, along with France and Britain launched an operation against Syria

WASHINGTON, April 14. /TASS/. The United States, along with France and Britain on Friday launched a military operation against Syria. This was stated by the President of Donald trump during a speech from the White house. 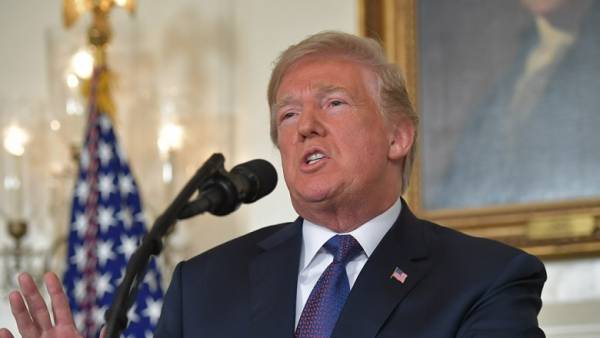 Speaking about the so-called chemical attack, which is attributed to Damascus, the President claimed that “this is not the act of man.” “This crime monster,” he said. According to trump, “joint American, British and French response to these atrocities [of Syria] will unite all means of our state power.” “We are ready to support the response, while the Syrian regime will not stop the use of banned chemicals,” said the President.

According to the President, the US is prepared to use “all instruments of national power” against Syria, while Damascus did not stop the use of chemical weapons.

“A joint American, British and French response to the cruelty [of Syria] will unite all instruments of our national power — military, economic and diplomatic,” he said.

The so-called chemical attack in Syria that Washington imposes on Damascus, trump called “the massacre, which was a significant escalation in the use of chemical weapons this terrible regime [of Syrian President Bashar al-Assad]”. “The United States will be a partner and a friend, but the fate of the region rests in the hands of its people”, — said the head of state.

The President asked Americans “to pray for [us] noble warriors and allies who do their mission.” “We pray that God will bring comfort to those suffering in Syria,” he concluded.