UN 13 APR — RIA Novosti. The British permanent representative to the UN Karen pierce called a “grotesque and blatant lies” the statement of the representative of the defense Ministry about the involvement of London to chemical attack in the Syrian city of Duma. 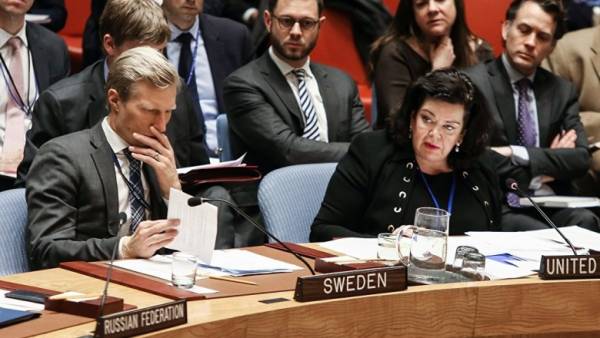 At the end of last week the West has accused Damascus chemical attack on the Syrian city of Duma in Eastern ghouta. Moscow has denied the information about the chlorine bomb, allegedly dropped by the Syrian military. The Russian foreign Ministry said that the purpose of stuffing about the use of toxic substances of troops to Syria to protect the terrorists and to justify possible military strikes from outside. In the General staff of the armed forces on March 13 reported on the forthcoming militants in Eastern ghouta provocation staged the use of chemical weapons.

The official representative of the defense Ministry major General Igor Konashenkov said Friday at a briefing that the spread in the media and social networks the video of the first aid to “victims” as a result of “chemical attacks” in the Syrian Duma is entirely staged. According to the representative of MO, installed and found the direct participants in the dramatization, which told how he conducted a staged shooting.

As reported by the General Konashenkov, the Russian defense Ministry has evidence that direct participation in the organization of a planned provocation by the alleged use of chemical weapons in the state Duma adopted in the UK. The purpose of the provocation, according to Konashenkov, was the aggravation of the situation in Eastern ghouta and “retaliatory” missile retaliation of the US on Syria.