Sociologists found out what Russians think about foreign policy

MOSCOW, 13 APR — RIA Novosti. Most Russians believe that Russia’s policy in recent times reduces the risk of a major war with the NATO countries, according to data from the survey of Fund “Public opinion”. 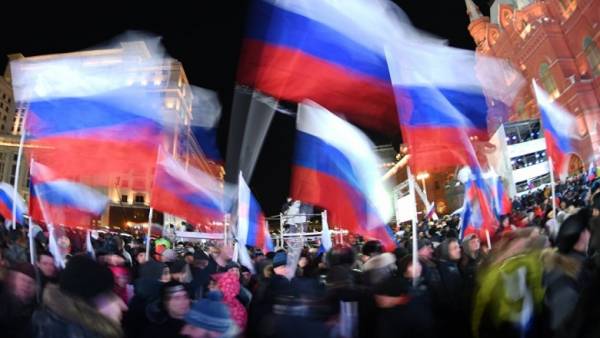 According to the study, among those who believe that Russia’s policy reduces the risk of war with NATO countries, 17% believe that Russia is pursuing a policy of peace, seeking to resolve all issues diplomatically, 9% said Russia demonstrates military power, strengthening its defenses, 8% of respondents emphasized that the credibility of Russian President Vladimir Putin and his actions to reduce the risk of war.

Also 47% of Russians believe that the real threat of a major war between Russia and NATO exists, the opposite opinion is shared by 39%, undecided 14%.

In addition, 38% of respondents believe that the probability of a major war between Russia and NATO countries is now higher than it was in the 70-ies of the last century, during the reign of Leonid Brezhnev, 17% believe that this probability is lower, 12% said that it remains on the same level, 34% were undecided.

In the survey, which took place from 7 to 8 April, was attended by 1,500 respondents of the 104 settlements of the 53 subjects of the Russian Federation. The statistical error does not exceed 3.6%. The survey method of interview at the place of residence of the Respondent.