Preference will be wrapped in the substitution 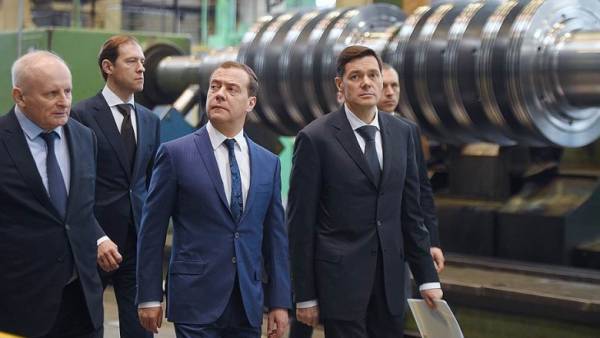 On the background of the entered USA of sanctions, the Chairman of the Board of Directors of PJSC “Power machines” Alexey Mordashov on Thursday during a meeting of the government Commission on import substitution has asked Dmitry Medvedev about support, in particular access to foreign markets, to go to which was much harder and the provision of holding preferences. After the meeting, the Minister of industry and trade Denis Manturov has promised that the government will support business. However, the scandal with the supply of gas turbines, produced “Power machines” together with Siemens in the Crimea for lessons learned — Alexey Mordashov expressed the readiness of Russian companies to develop gas turbine technology for public-private partnerships.

The holding in St. Petersburg the meeting of the government Commission on import substitution, which took place on the territory of PJSC “Power machines”, served as Chairman of the Board of Directors of the company Alexey Mordashov reason to appeal to the Prime Minister Dmitry Medvedev with a request for support. The relevance of this issue is due to the fact that on January 26, the U.S. Treasury imposed sanctions against the machine-building holding “Power machines”, around which last year’s scandal over the supply of the Crimea made in cooperation with the German Siemens gas turbines.

The main request of Alexey Mordashov was to provide “Power machines” support of access to the domestic market and overseas, which is “not closed, but has become much more difficult,” particularly through the provision of state guarantees, when required by customers.

“Today, the possibility to obtain such services from banks in connection with the sanctions we have is very limited,” acknowledged Mr Mordashov, asking Roseximbank, the Russian export centre and the Central Bank to help the company in these matters. In addition, Alexey Mordashov asked about the preferences on the domestic market, he did not explain what was going on, but was assured that they “cannot survive”.

“The famous story of the gas turbines once again underlines that Russia needs its gas turbine technology”, — said Alexey Mordashov to the Prime Minister, noting that “Power machines” are ready to take on the development of Russian technologies. However, to decide this question at present: according to Mr. Mordashov, Power machines can take on half the costs. The proposal is to implement this project based on public-private partnership, state support may be in financing R & d and testing base. “This practice is widespread in the world,” said Alexey Mordashov, adding that the German government allocates Siemens “hundreds of millions of euros” on the development of advanced types of equipment.

Dmitry Medvedev to comment on these proposals did not become, having suggested to continue the discussion behind closed doors.

The issue of support of the enterprises which have got under sanctions, the Prime Minister spoke before the speech of the head of “Power machines”. He noted that it will focus primarily on saving industries and jobs, not compensation for losses of owners (although it “must also be borne in mind”).

At the end of the meeting, the Minister of industry and trade Denis Manturov has promised that the government will support “Power machines”. “Everything that was discussed today, all of these things available, it concerns guarantees of the export. Of course, we’ll keep it all to render”, — said Mr. Manturov.

When discussing directly the import substitution program of Dmitry Medvedev, has any counter-questions to the business of the company was to develop corporate plans for import substitution, but some of them have not yet adopted such documents, or even stuck at the analysis stage. In this regard, the Prime Minister called on business to “more actively to commence import-substituting projects” — “now, there are a number of new problems which, probably, require state response.”

In General, speaking about the dynamics of the process, the Prime Minister recalled about the growth of production of Russian cars (almost 20%), agricultural machinery (21%), road-building and municipal machinery (27%) and food equipment (20%). To support the production of the latter on the background of high yields at the Commission meeting suggested that the head of Ministry of industry and trade Denis Manturov at the expense of increase of import duties on all equipment with a 0.5% to 10%.