The picture shows Ronaldo sealed Shemitta burning running man in a gas mask, who participated in anti-government demonstrations in Caracas on 3 may 2017. 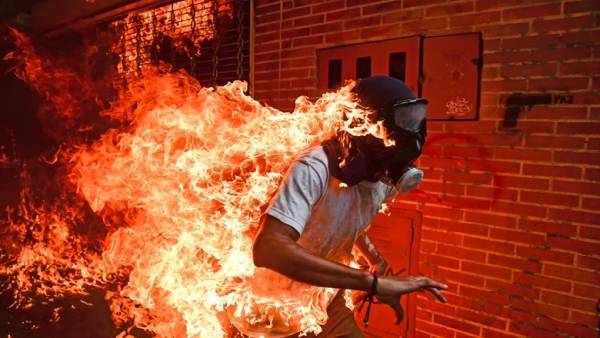 The HAGUE, 12 APR. /TASS/. The photographer from Venezuela Ronaldo of Shemitta recognized by World Press Photo. The ceremony of announcement of winners and prize-winners of the prestigious international competition was held Thursday night in Amsterdam.

The photo shows the burning of a running man in a gas mask — 28-year-old Jose Victor Salazar of Bals who took part in anti-government demonstrations in Caracas on 3 may 2017. His clothes caught fire, exploded when a fuel tank set on fire next to the motorcycle. Burns first and second degree, he was taken to hospital, where he was given necessary help.

“Photos should tell about an event that is important enough and which at the same time raises questions”, — said the Chairman of the jury Magdalena, Herrera, explaining the choice made. “This is a classic shot, but at the same time it carries an amazing energy and dynamism, she said. — It is distinguished by color, composition and strength. All of this gives me very strong emotions.

For its part, the jury member from Turkey Bulent Kilic drew attention to a small detail in the picture. “On the wall caused a small image of a gun and the inscription “paz” on the side. It means “peace”. This makes the photo even stronger,” he said.

For the title “photo of the year” fought five more shots, including those made during the battle for Mosul, and during the terrorist attack in London.

World Press Photo is the most prestigious international photo contest, leading its history since 1955. Its goal is to maintain and develop high standards in photojournalism and photodocumentary. During the selection process this year the jury viewed over 73 thousand pictures taken 4,5 thousand photographers from 125 countries. Among the winners this year included 42 photographer from 22 countries, including the Russian Tatiana Vinogradova, who took third place in the category “People” with the photo series “Girls.”