Experts gave the authorities the Council to minimise the protests

MOSCOW, 13 APR — RIA Novosti. The policy of censoring social networks and messengers of the ban in Russia will not lead to the restriction of protest activity, the authorities should actively work with the alternative information and opinion leaders in it, says the report of the communication holding “Minchenko consulting”. 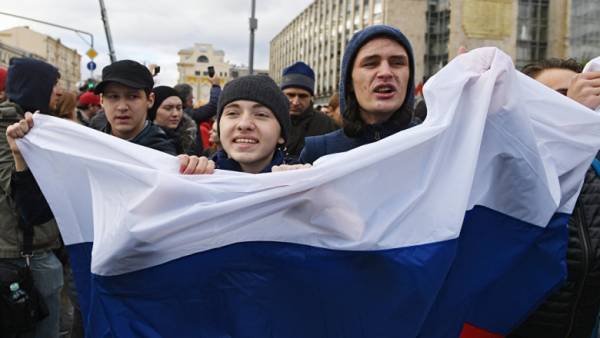 The most acute and large-scale now the authors of the report called four forms of protests: environmental protests, the speech of defrauded investors and depositors, and the protests caused emergencies and technological disasters.

Experts come to the conclusion that risk prevention is needed, including the incorporation of new information reality in which social networks and instant messengers are not only disseminators of information, but also “points of the self-organization of protest groups.”

“It is worth noting that the policy of censoring social networks and messengers of the ban will not lead to the restriction of protest activity — one platform, fell under the ban just come different. Therefore necessary to work with an alternative information space, and with opinion leaders in it”, — stated in the report.

Speaking about the protest risks associated with the problem of defrauded investors, experts mention that in 2017 the most extensive were the protests of investors “Tatfondbank”.

“The protesters have demonstrated a high level of self-organization, coordinating their activities via instant messengers and social networks. The signal velocity was very high — several hundred people surrounded the building of the government of the Republic of Tatarstan within half an hour after the publication of the call in the group in Telegram”, — the report says.

A major role in destabilizing protest, according to experts, played and viral distribution through the WhatsApp messenger.