Sechin called a matter of honor, the testimony in the trial of the speaker

The head of “Rosneft” Igor Sechin called a matter of honor, the testimony in the trial of former Minister of economic development Alexei Ulyukayev. He stated this in an interview with TASS, noting that he came to the meeting as soon as he had the opportunity. 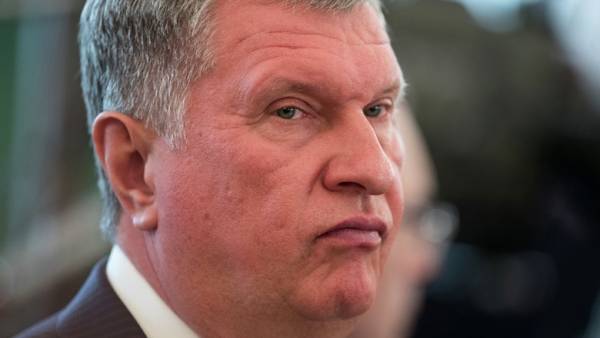 “I had hoped that the court of first instance will take my written testimony, unfortunately, this did not happen. So as soon as the opportunity arose, I came to the court. For me it was a matter of principle, because I wanted my testimony to be considered by the court,” — said Sechin.

The head of Rosneft added that the court confirmed its position on the requirement of the former Minister of bribery, after which he “himself designated amount, he came over her, and he left.” When giving evidence Sechin felt a responsibility to “fight against corruption in the country has received additional results.”

As the correspondent “Tapes.ru” from the courtroom, according to lawyer Timothy Gridneva speaker, Sechin said in court that the former Minister demanded a bribe of two million dollars when they walked down the stairs during a break at the BRICS summit in Goa. He speaker during the meeting refuted this statement, explaining that do not overlap with Sechin at the summit. According to him, government members and business representatives went to negotiate separately.

12 APR Sechin came to the Moscow city court on the complaint to the verdict Ulyukayev. He was questioned as a witness in the circumstances of the case about the bribe and on the history of Rosneft’s acquisition of shares of “Bashneft”. The court decided to interrogate him behind closed doors, because the deal “Bashneft” is a commercial secret.

16 December 2017, the court sentenced the accused in bribery former Minister of economic development Alexei Ulyukayev to eight years of imprisonment in a strict regime colony and a fine of 130 million rubles. Protection of the convicted decided to appeal the verdict before it was announced to the end.

Speaker was detained November 14, 2016 on suspicion in extortion of a bribe in “Rosneft”. The investigation claims that he demanded money from the head of the Corporation Igor Sechin for a positive conclusion about the possibility to purchase state-owned shares “Bashneft”. During the arrest of the Minister was found to have a large bag, which turned out to be two million dollars in denominations of 100 dollars. After excitation of criminal case Ulyukayev dismissed.