Missile destroyer of the U.S. Navy came 100 km to the Russian base in Syria

Moscow. April 10. INTERFAX.RU. Us destroyer “Donald cook” (DDG-75) equipped with cruise missiles “Tomahawk” and a missile defense system “aegis”, went to the Syrian Tartus, where the base logistics of the Russian Navy, at a distance of 100 km, reports on Tuesday broadcaster CNN Turk. 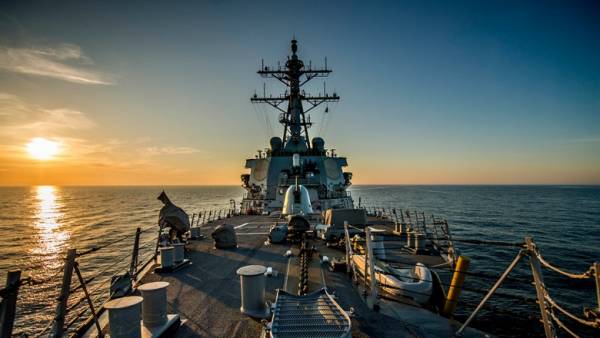 According to him, the day before the destroyer left from the Cypriot port of Larnaca and headed to the coast of Syria. It is noted, it is four times circled by Russian military aircraft.

According to the American newspaper The Wall Street Journal, in the near future to “Donald cook” missile will join the US Navy destroyer “porter”. (The Pentagon has denied reports of approaching aircraft of the Russian Federation videoconferencing with the US Navy destroyer)

In turn, the Chairman of the Duma Committee on defense Vladimir Shamanov said that the U.S. did not notify Russia about the approach of the American group of Navy ships to a Russian naval base in Tartus.

“In the area of Tartus on the removal of 150 miles, you receive a grouping of ships of the U.S. Navy. In the accepted international practice pre-notified the potential participants of the events in the area. We have not been informed, although legally we ratified a contract on our two bases in Tartus and Mamima,” said Shamanov on Tuesday at a meeting of the state Duma.

“Moreover, I declare in the face of the President of the United States Donald trump what he thinks and, despite the resolution or the lack of them in the UN security Council, in 36 hours they can strike. It all smacks of events that are outside accepted international norms,” — said the Shaman.

“Preparing to strike” on Syria