In the Eastern Mediterranean in order a missile strike on Syria in the near future can be deployed two American destroyers — the USS Donald Cook, and USS Porter. 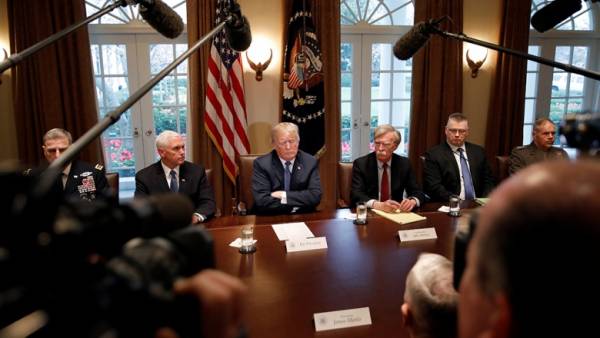 If Washington strikes Syria, Russia will have to answer — just have to decide whether by force or not. Military commentator “Газеты.Ru” Mikhail Khodarenok analyze what can be the use of force response to possible actions of Washington.

Quite possibly, the President of the United States Donald trump has already decided how to respond to the alleged use of chemical weapons in the Syrian city of Duma, and American ships took positions to launch guided missiles “Tomahawk”.

Destroyer with guided missile weapons (UB) Donald Cook (DDG-75), port — naval base Rota, Spain, is in combat the US Navy since 1998. The ship took part in operation “Iraqi Freedom” in 2003. With 2014 destroyer included in the Sixth (Mediterranean) fleet of the U.S. Navy.

URO destroyer Porter (DDG-78) in service since 1999, is the fighting part of the 2nd squadron of the Atlantic fleet of the U.S. Navy, naval base and home — Norfolk, Virginia. This ship has already participated in the strike against Syria on 7 April 2017 (after the alleged use of chemical weapons by the troops of Bashar al-Assad in Khan Sheyhun).

The main weapon of both the American destroyers are the cruise missiles of sea basing “the Tomahawk” with a range of up to 2.5 thousand km In normal cases and shock ships can be equipped with a 56 or 96 such missiles respectively.

If the US does decide to strike against the troops of Syrian President Bashar al-Assad, Russia reserves the right to respond to possible U.S. strikes on Damascus and its suburbs. As stated by the first Deputy defense Minister of Russia, chief of the General staff of the Russian Armed forces army General Valery Gerasimov in March 2018, Moscow will have to react if the lives of Russian military personnel in Syria would be at risk.

“In Damascus, in the establishments and facilities of the Ministry of defence of Syria are Russian military advisers, representatives of the Center for reconciliation of the warring parties and military personnel of the military police,” reminded the General of the army Valery Gerasimov, commenting on the possibility of American missile attacks on Damascus neighborhoods under the control of the government army.

In the event of a threat to the life of our soldiers the Armed forces of the Russian Federation may take retaliatory action — like the missiles and the media that will use them.Valery Gerasimenia of the Russian army

Yesterday, Russia’s permanent representative to the UN, Vasily Nebenzia warned the US about severe consequences in the event of a strike on Syria.

To blind and attack