The US is preparing a strike on Syria

Moscow. April 10. INTERFAX.RU — the United States has begun to “prepare the ground” for an attack on Syria in response to reports of “suspicions” that the Syrian town of Duma was to use chemical weapons, blame Damascus and Russia, told the Wall Street Journal. 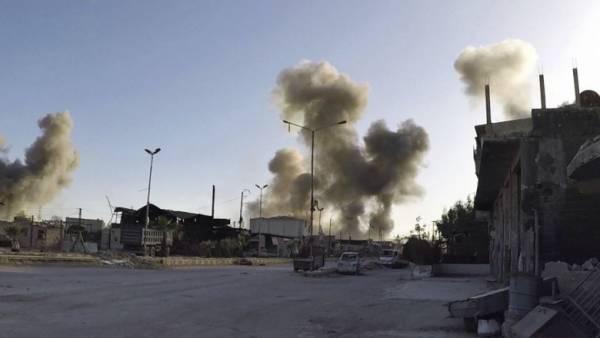 She noted that before the meeting with the military leadership, the President, Donald trump told reporters that after watching the footage of dead women and children in the Duma, he was ready to take “quick fix”.

It will not remain unanswered and the response will be powerful. When — I will not say.Donald Trump

Before meeting with members of his Cabinet to discuss Washington’s response to allegations of chemical weapons, trump said: “We cannot allow such atrocities as these. We will take an important decision over the next 24 or 48 hours.”

At the same time, trump said, answering the question of who should be responsible for the chemical attack that “it turns out”, but added that this question “there are already good answers”.

He said that the US has “a lot of answers, war”, promising that this will be known “very soon, but perhaps after the fact”.

The Wall Street Journal notes that, “at least one missile destroyer of the U.S. Navy extends to the Syrian coast.”

The newspaper writes that “the Pentagon has already prepared for Mr. trump a series of military measures,” as the President said earlier that “all will pay” for the chemical attack, including Russia and Iran, “if they were helping Damascus to use chemical weapons”.