Moscow and Washington are looking for a means of postponement

Vladimir Putin and Donald trump want to date but do not have the opportunity. 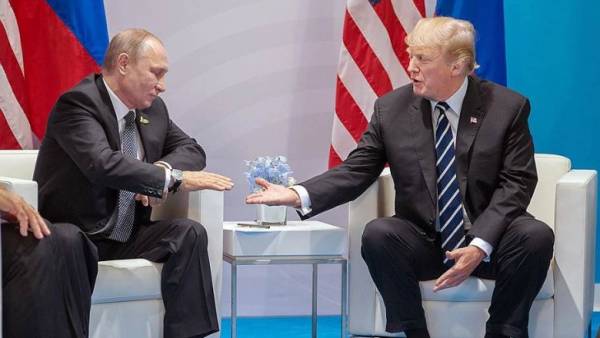 On Friday, April 13, the US Senate is to hold hearings on the allegations of the former head of the CIA Mike Pompeo as Secretary of state. According to a source “” close to state Department, then US foreign Minister and Russia will be able to prepare the meetings of two presidents, Donald trump, and Vladimir Putin. The source of “Kommersant” close to the Kremlin, admitted that in the current confrontation to convene a full-fledged bilateral summit will be “difficult” and did not rule out that the heads of state will meet only at the end of the year on the sidelines of a meeting of G20 leaders in Argentina.

Despite the opposition of some senators, serious problems with the approval of Mike Pompeo in the office of the Secretary of state is not expected. After he officially will assume his new post, foreign Minister of the US and Russia, according to Kommersant’s source close to the Department of state, will be able to proceed with the organization of the meeting of the two presidents.

Recall, Donald trump offered Vladimir Putin to hold such a meeting during their last telephone conversation on March 20. In the course of those negotiations the U.S. President congratulated his Russian counterpart on his re-election and, as reported later, the assistant of Vladimir Putin, Yuri Ushakov, invited him to come to Washington. At the same time, according to a source “” close to the Kremlin, Donald trump also made it clear that he is ready to visit Moscow if Vladimir Putin will visit the American capital.

At a briefing last Friday, White house spokesman Sarah Sanders assured the journalists that the us leader still determined to meet with Vladimir Putin, despite a few hours earlier imposed tough new sanctions against Russia. Recall “in response to the set of malicious activities of the Russian government around the world, which continues and becomes more defiant,” the U.S. Treasury has blacklisted 38 Russian businessmen and officials, as well as companies.

To a journalist’s question, whether the new sanctions that the presidents ‘ meeting will not, Sarah Sanders replied: “No, not at all. We have, As the President said, he wants to have good relations with Russia, but it will depend on the actions that Russia will do. But at the same time, the President will continue to take a tough stance until we see changes. We will continue to work to ensure that at some point meeting with Vladimir Putin”.

Vladimir Putin and Donald trump full-fledged bilateral summit until now was not.

In July of last year, they had a two hour meeting on the sidelines of the G20 summit in Hamburg, and in November briefly spoke at the APEC summit in da Nang. Kommersant’s source close to the Kremlin said: in the current situation, which became even more intense in recent months, to organize a separate bilateral meeting of the presidents of the United States, Russia or in a third country will not be easy.

Earlier, US Ambassador to Russia John huntsman said in an interview with “Kommersant”: “the Meeting (between the presidents.— “B”) may take place provided that we can progress in our relationship.” He said that the summit needs to be “meaningful”, and thus gave to understand a lot in Russian-American relations will depend on whether Moscow’s intervention in scheduled for November 6 midterm elections to Congress. We will remind, the U.S. government accused the Russian secret services in an attempt to manipulate opinion of American voters in the presidential election of 2016, several commissions are investigating the version about the possible collusion of the election headquarters of Donald trump with the Kremlin.

The Executive Director of the Center for the national interest (WA) Paul Saunders doubts that the meeting will be convened in the coming months. “Given the current atmosphere in the relationship, as well as the extremely tense situation around Syria, such a scenario seems highly unlikely to me,” said he, “Kommersant”.

This opinion is shared by the Deputy Director of the center for comprehensive European and international studies, HSE, expert of the International discussion club “Valdai” Dmitry Suslov. According to him, does not contribute to full-scale summit between the two presidents “the negative trend in Russian-American relations, a cascade of sanctions, the rhetoric, the preservation of “toxicity” to the Russian theme in us politics and the arrival of the White house as national security adviser “hawk” John Bolton”.

Earlier, American media reported that Vladimir Putin’s invitation to Washington was a personal initiative of Donald trump. “And it fully fits into the logic of its approach to foreign policy, aimed at transactions, — said “Kommersant” Dmitry Suslov.— Much will depend on the ability of Donald trump to insist on. And whether the White house believes that the meeting with Vladimir Putin will allow him to declare the foreign policy achievement of practical results and if it does not lead to exacerbate his domestic problems.” According to experts, most likely, the presidents are simply more likely to talk on the phone. “Maintaining close contact on a personal level is extremely important for the prevention of war, and the current situation is fraught with this,” he said.

Kommersant’s source close to the Kremlin, however, says: until the end of the year, Vladimir Putin and Donald trump to see, even if some of the summit will not. As expected, both leaders will take part in the G20 summit, which will take place on 30 November—1 December in the Argentine capital.