Media: a truck crashed into a group of people in Munster, three people were killed

BERLIN, April 7. /Offset. TASS Anton Dolgunov/. The truck drove on Saturday to a group of pedestrians in the city of münster in Germany. 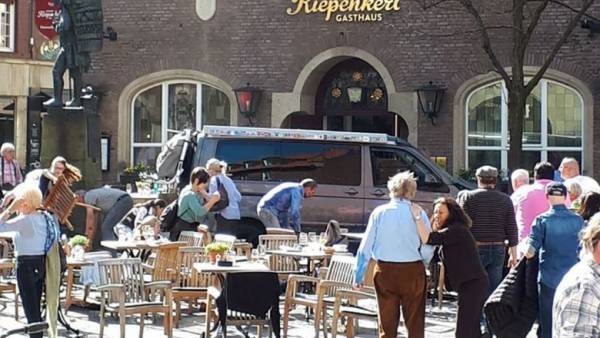 In the incident, three people were killed, 30 were injured. This was reported by the correspondent of TASS in the police of the Federal state of North Rhine — Westphalia.

“A small truck drove into a group of people. Several of the victims, the exact number can not lead. 30 injured, six of them in serious condition, they struggle for life”, — said the representative of law enforcement bodies.

“The motives of the person who was driving is unknown,” she said.

The representative of the local police Andreas Bode reported that the truck driver committed suicide. “About the personal data we still can not say anything”, — he said in the broadcast of the German television.

The police said that, despite the circumstances of the tragedy, while there is no reason to talk about the attack. “We have no data on this subject,” said TASS in law enforcement bodies. While law enforcement officers are asked to “refrain from speculation” and wait for official information. “We are investigating in all directions”, — said the police in response to a request for comment on reports of Newspapers.

Also, law enforcement agencies reported that managed to bring the situation under control. “Many police officers and representatives of other operational services. The overall situation is under control,” — said a police spokesman told TASS.

Attack truck in Germany? . Saturday April 7, the truck rammed the people sitting in a cafe in the German city of münster. . What is known at 18:40 on 7 April . According to the media affected 30 to 50 people. Six of them in critical condition. Three of the victims. . The emergency cordoned off by police looking for explosives. The version of terrorist attack.To the scene sent helicopters to quickly evacuate the victims. . According to Rheinische Post, immediately after the incident, the driver was shot. . #cpug #Germany

Previously, the newspaper Rheinische Post reported three dead and 30 injured in the incident. The publication calls the incident a “terrorist attack.” The newspaper Westfälische Nachrichten reports about 50 wounded. In addition, several media outlets indicates that the car drove into a group of people who were sitting in the cafe.

It was noted that part of the city, where was an emergency, cordoned off. The police Twitter asks everyone to refrain from visiting the centre of Munster. Those who are there at the moment, as soon as possible to leave the area so as not to interfere with the work of investigators, indicate guards.