Aman Tuleyev does not fit in the parliamentary format

The leader of United Russia in the Duma against the appointment of ex-Governor by the speaker of the legislative Assembly. 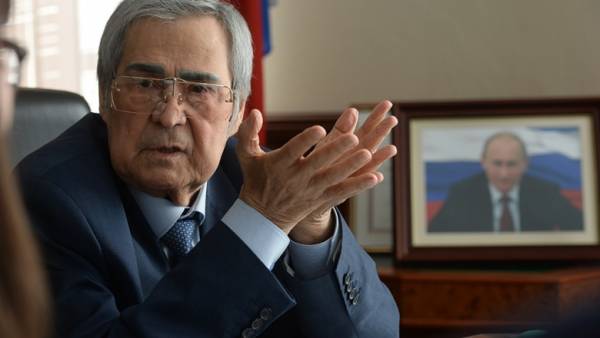 Deputies of the Kemerovo regional Council may elect ex-Governor Aman Tuleyev speaker of the Parliament. The head of the faction “United Russia” in the state Duma Sergei Neverov yesterday opposed the nomination of Mr Tuleyev for the post of speaker because “people just don’t understand this decision”. Kemerovo MPs are sure to win during the voting in the regional Council is the ex-Governor. Formal party decisions Aman Tuleyev is not accepted, said the source “Kommersant” in the Federal leadership of “United Russia”.

The head of the faction “United Russia” in the lower house, former Secretary of the General Council Sergei Neverov, was elected to the state Duma from this area did not support the idea on the nomination of Aman Tuleyev for the post of speaker of the legislative Assembly.

I think this is wrong, and I think people just don’t understand this decision.Sergei Neurourological of the faction “United Russia” in the lower house

On the eve of the eight deputies of the state Duma from the Kemerovo region (Russia) appealed to the acting Governor Sergei Tsivilev with a request to support the candidacy of Aman Tuleyev for the post of Chairman of the regional Council. Press Secretary of the President Dmitry Peskov, commenting on the letter of deputies, said yesterday that the presidential administration is not going to interfere in this process and “it is the prerogative of the regional Parliament”.

The evening of April 6 Sergei Neverov reiterated in its Facebook that it considers incorrect the appointment of Mr. Tuleyev speaker.

Then he added: “And this is my personal opinion. Because rails is a whole era”.

A source at the Federal leadership of United Russia told Kommersant that the question of support to the candidacy of Aman Tuleyev has not been discussed yet, maybe it will happen next week. 12 April, the Presidium of the General Council of the party.

The regional Council Deputy from the LDPR Igor Ukrainians is sure that his colleagues “are more likely to rely on the opinion and desire of Tuleyev, but not on the opinion of Moscow leaders”.

“The only thing that can prevent the development of this scenario — failure of Alexey Sinitsyn to write a statement of resignation to the chair. But this is unlikely. He is ready to resign”, — said “Kommersant” the Lord of the Ukrainians.