The interior Ministry responded to the request of the Deputy of the state Duma from the Communist party Valery Rashkin. 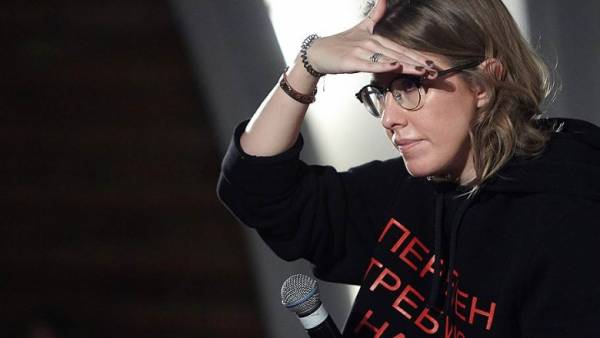 State Duma Deputy from the Communist party Valery Rashkin received from the Department of internal Affairs across Moscow response to your request to Prosecutor General Yuri Chaika about the compliance statements of Ksenia Sobchak on the status of Crimea with the Russian Federation legislation. The interior Ministry said that the words of the candidate that the Crimea “from the point of view of international law Ukrainian” and should hold a second international referendum, will check on extremism until the end of the year.

In response to a parliamentary inquiry, which Valery Rashkin received from the main Department of MIA in Moscow (the Prosecutor General’s office forwarded the request to the interior Ministry), said that state budgetary institution “Moscow research centre” finished checking the statements of the presidential candidate of Ksenia Sobchak about Crimea on the March in the fourth quarter of this year. The interior Ministry reported that at this institution “for the purpose of implementing psycho-linguistic studies focused materials collected by the staff of the Centre to combat extremism,” the Moscow police Department. “After the investigation a decision will be made on the results of verification of circulation, of which you will receive within the statutory period,” — said the interior Ministry.

Mr. Rashkin has sent to the Prosecutor General with the request to verify the statements of Ms. Sobchak about the Crimea on extremism in December 2017. Did he mention her statement at a press conference that “from the point of view of international law Crimea is Ukrainian. Point”, as well as an interview with Ksenia Sobchak CNN, where she repeated the idea. “I really believe that by international law Crimea is Ukrainian. […] To date, the only compromise solution to the situation is an international referendum. […] Sanctions, let’s be objective, was imposed on Russia after the annexation of Crimea, and after the “Boeing” Malaysian, it’s still a point of reference, this is the first, second, when I talk about the referendum, I’m talking about an international referendum. It’s not only the residents of Crimea and citizens of Ukraine and citizens of Russia will decide the fate — this, in fact is a compromise — this territory”, — quotes the Deputy of another statement of Ms. Sobchak.

Mr. Rashkin has argued in its request that according to the Constitution, a referendum may not lead to the exit from the Russian Federation of one of its subjects. He recalled that in 2015 in Karelia was convicted under article “Public appeals to implementation of actions aimed at violating the territorial integrity of the Russian Federation” the municipal Deputy Vladimir Samarkin, which called for a Crimea referendum on leaving Russia.

Valery Rashkin asked the attorney General to verify the statements of Ksenia Sobchak in compliance with the Criminal code. With such a request the MP appealed to the FSB, the Department replied that they do not see in the words of Madam Sobchak violations of the law. To comments Ksenia Sobchak and her representatives had failed.