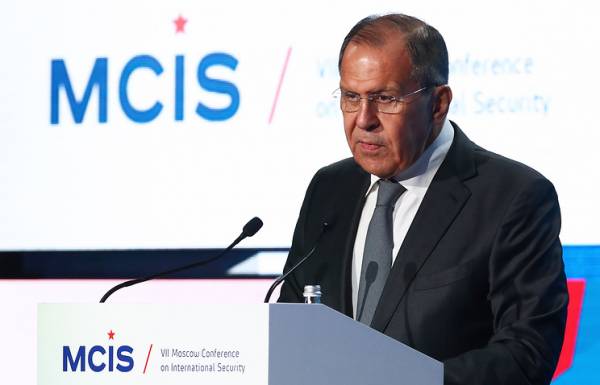 MOSCOW, April 5. /TASS/. Moscow concerned by U.S. attempts to lower the threshold of use of nuclear weapons, he said, speaking Thursday at the VII Moscow security conference, foreign Minister Sergei Lavrov. He also noted that the dialogue between the presidents of Russia and the US, including on issues of strategic stability should not get bogged down in political intrigue.

Speaking at the conference Deputy head of the interior Ministry of the Russian Federation Igor Zubov said the growing number of attempts to use sporting events to undermine relations between Russia and the West. He also reminded that sporting events are always a potential sabotage, and told how the Russian law enforcement agencies are prepared to ensure the safety of the world Championship on football which will pass in Russia from June 14 to July 15, 2018.

State Secretary of Regardie Sergei Zakharkin said the growing interest of colleagues from Western countries to cooperate with Asgardia.

The dialogue between the presidents of Russia and USA Vladimir Putin and Donald trump, including on issues of strategic stability should not get bogged down in political intrigues and bureaucracy, said in his speech at the conference the Minister of foreign Affairs of the Russian Federation. According to him, Moscow supports a broad dialogue on the most pressing issues of our time, including maintaining strategic stability. “On this presidents of Russia and the United States spoke on the telephone on March 20. I would like to understanding of the special importance of this topic by leaders of the two countries are not mired in bureaucratic games and not become hostage to political intrigues,” – said Lavrov.