Russia, Iran and Turkey adopted a statement on Syria 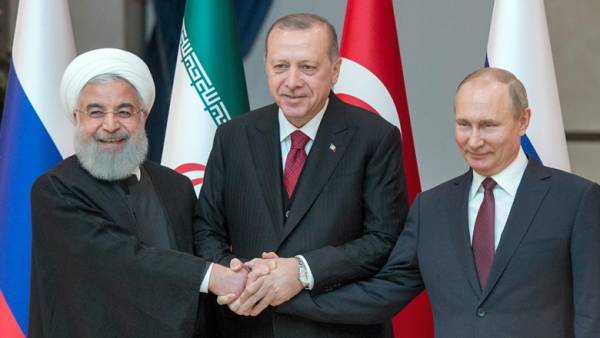 In addition, the three heads of state urged UN member States and international organizations to increase humanitarian assistance provided to this country. The presidents noted that the talks in Astana were the only initiative that has helped to reduce violence in this country, where since 2011’s civil war. The leaders of Russia, Iran and Turkey also expressed its support for the UN special envoy on Syria Staffan de Mistura and agreed to hold the next summit in Iran.

“Once again expressed support to facilitate the beginning of work of the Commission in Geneva as soon as possible with the help of the UN special envoy for Syria and to cooperate with the three guarantor countries”, — stated in the message.

The leaders also “expressed their conviction that there can be no military solution to the Syrian conflict and that this conflict can be completed only through a political process through negotiations.”

In addition, the summit participants called on all parties to the conflict in Syria to respect a UN resolution. They “welcomed the resolution 2401, the UN security Council adopted in response to the appalling humanitarian situation in Syria, including East ghouta, Foix and Kerau, Idlib, Northern Hama, and Raqqa Rakban; leaders strongly urged the parties to the conflict to act in accordance with the provisions specified in the resolution, including abstaining from violations of the cease-fire.”