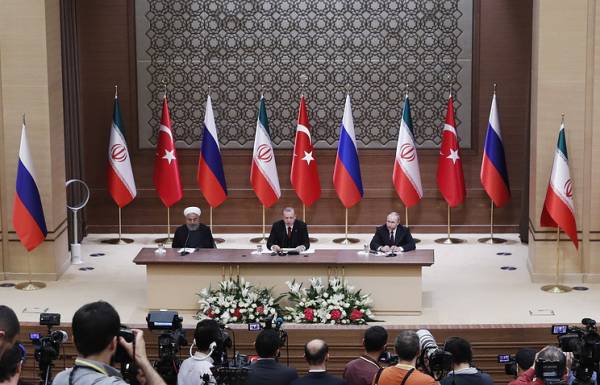 ANKARA, April 4. /TASS/. The President of Russia Vladimir Putin noted the importance of the joint statement on Syria in support of the sovereignty and unity of this country against the background of attempts to aggravate the contradictions in the Arab country.

“Reached important agreements, which is reflected in the adopted following the meeting a joint statement – he said at the summit. – Note that this document emphasized the firm commitment of Russia, Iran and Turkey to contribute to the strengthening of sovereignty, independence and territorial integrity of the Syrian Arab Republic. Such a principled stance is particularly relevant today, amid the growing attempts to aggravate inter-ethnic and inter-confessional relations in the Syrian society.”

Putin added that such attempts aim to “split the country apart, while maintaining the potential for conflict in the middle East for many years to come”.