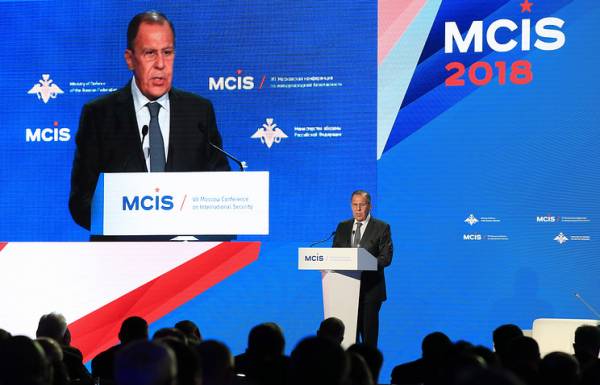 MOSCOW, April 5. /TASS/. The Minister of foreign Affairs of Russia Sergey Lavrov said that many countries who had sent Russian diplomats, just “twisted arms” is a mockery of international law.

According to him, to further the demonization of Russia by the West organises a gross political provocation.

“The fact Skripal was fictitious and staged as a pretext for unjustified expulsion of Russian diplomats not only from the US and the UK, but other countries who simply twisted his hands,” – said the Minister at the Moscow security conference.

“This blatant mockery of international law, diplomatic ethics we have not seen, – said Lavrov. – We will continue to respond appropriately to the same steps, but at the same time want to establish the truth. Insist on substantive and more responsible investigation in full compliance with the Convention on the prohibition of chemical weapons”.

The Russian foreign Minister also stressed that the Western countries won’t be able to ignore the questions posed by Moscow on the basis of this Convention.

Causing unilateral steps in the West headed by the United States led to a dangerous imbalance in the world, said Lavrov.