Sergey Lavrov charged the West a long list of complaints. 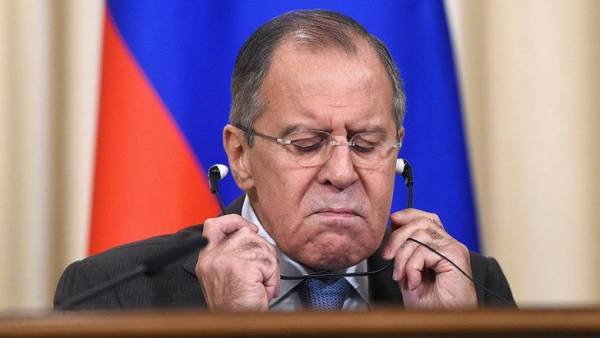 Russian foreign Minister Sergei Lavrov for his performance opened the second day organized by the Ministry of defense of the Russian Federation Moscow security conference. In a 12-minute speech he fit all the main claims to the West. The US and its allies have been criticized, in particular, for “doubtful geopolitical game”, “trying to save the state of stable chaos” in the middle East and “the demonization of Russia”. Representatives of the administration of the American President Donald trump in the hall: the participation in the conference they don’t accept.

Coming on the scene, Sergei Lavrov first said at the time that has elapsed since the conference in 2017, the world situation is only complicated. Besides, who’s to blame, was devoted to the rest of the speech, which lasted 12 minutes.

The Minister said about “the continuing unilateral actions of the West led by the US, which in some cases are provocative, leading to a dangerous imbalance in global governance”. And that “Washington and London did not draw conclusions from the tragedy of Yugoslavia, Iraq, Libya, Syria, Ukraine.” And about the use of American logic of “friend or foe”, “either with us or against us.”

“Increasing disregard for international law and multilateral organisations such as the UN. More concerns regarding the negotiability of the United States, especially against the background of attempts to destroy a major international agreement”, — continued Sergei Lavrov, explaining, in particular, about the Iranian nuclear deal, the UN decisions on the middle East, the Paris climate agreement, the WTO principles.

Thereafter, Sergei Lavrov went to the Ukraine — although they said it not about her but about the “trend towards revisionism” (and all gathered in the hall it was clear from which side).

Audit and trying to put the Minsk agreements on the Ukrainian crisis settlement, implementation of which is sabotaged by the current authorities in Kiev. Their backers in the US and Europe turn a blind eye, while encouraging the actions of the “party of war” in Kiev.Sergei Lavrov, the Russian foreign Minister

The following mandatory item of the program was Syria (again, in the breaking of the actions of the West). “Stop trying to flirt with terrorists, dividing them into poor and not — said the Minister.— One gets the impression that the Americans are trying to save on this huge geopolitical area (in the middle East.— “B”) state of controlled chaos”.

In the sphere of strategic stability, continued Sergey Lavrov, “Washington puts at the forefront of its policy of ensuring military superiority, and undermine the parity”. This, according to the Minister, is the deployment of a global missile defense system and increased military activity of NATO near the Russian borders:

The most serious concerns about the US line by lowering the threshold of use of nuclear weapons. Sound ideas to bring under article 5 of the NATO Treaty (an attack on one NATO member is considered an attack on all.— “B”) problems arising in cyberspace. While our persistent calls to start a professional conversation on confidence-building measures and combating threats in this area do not find a positive response neither in Washington nor in Brussels.

He could not fail to recall the key irritant in relations in the last month — a case of poisoning in British Salisbury ex-GRU officer Sergei Skripal and his daughter Julia. Sergei Lavrov immediately placed points over i: “To further demonize Russia organized a rude provocation. The so-called case Skripal was a pretext — a false or staged — for arbitrary mass expulsion of Russian diplomats not only from the United States and Britain, but also from other States, most of which are just twisted hands. Such blatant mockery of international law, diplomatic ethics, basic decency we haven’t seen.”

“It is unacceptable — as it was with the incident in Salisbury, and in several other situations, from the election in the US to chemical attacks in Syria and referendum in Catalonia instead of presenting specific facts, is an honest investigation to put forward the allegations — said Sergey Lavrov.— It is only in the famous book by Lewis Carroll, the Queen requires to first give the defendant a real term, and then to hear the verdict of the jury: guilty or not guilty. But Carroll wrote a satire, using the genre of fairy tales”. Note that this analogy with Lewis Carroll’s “Alice in Wonderland”, the Russian foreign Ministry addressed on his page on Facebook on 1 April.

Sergei Lavrov said: “Yesterday’s debate in the Hague showed that self-respecting adults in fairy tales do not believe.” Recall, on Wednesday held a meeting of the Executive Council of the Organization for the prohibition of chemical weapons (OPCW) in the “case Skripal”. Prepared by Russia joint statement about the need “to ensure that this problem will be solved within the legal framework” — was supported by 14 members of the Council from 41. These countries — Belarus, Syria, Kazakhstan, Armenia, Azerbaijan, Iran, Venezuela, Kyrgyzstan, Pakistan, Tajikistan, Uzbekistan, Nicaragua, Cuba and also Russia itself.

The final part of the speech of Sergey Lavrov devoted to the role of Russia. It is, according to the Minister, promoting and continue to promote “a positive agenda in the interests of global stability”. “The sovereignty and independence of Russia will defend efficiently,” summed up the Minister.

In the VII-th Moscow conference on international security, attended by delegations from 95 countries. Among the speakers at the plenary sessions — the Ministers of defense of Iran, Iraq, Pakistan, Armenia, Kazakhstan, Tajikistan, Belarus, China, India, Serbia, Venezuela, Mongolia, Vietnam, Indonesia, Guinea, Cameroon, Congo, Uruguay. Meanwhile, the US and most Western countries represented only at expert level of senior officials among the participants there.