Zakharchenko claims that he seized 9 billion. he owns only 93 thousand

According to the ex-Colonel “the rest of the property was and is owned by relatives of various degrees of kinship and other persons.” 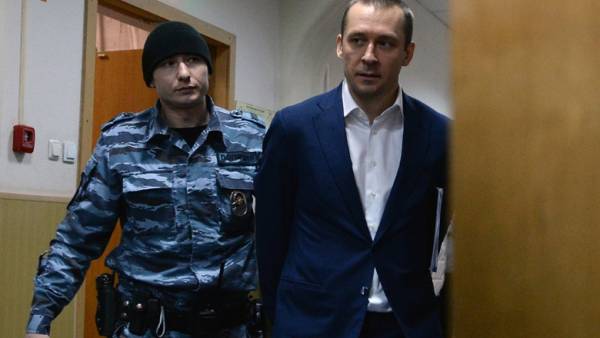 MOSCOW, April 4. /TASS/. Former Deputy head of the “T” Guebipk of the MIA of Russia, Colonel Dmitry Zakharchenko, accused of accepting bribes and abuse of power, owns only about 93 thousand rubles seized from him 9 billion. About this Zakharchenko told, answering questions of the correspondent of TASS, transferred to prison through his lawyer Alexander Gorbatenko.

Of all the property I own 92 thousand 800 roubles allowance for the month. The rest of the property was and is owned by relatives of various degrees of kinship and other persons. The existence of certain individuals whose property was turned into the income of the state, I only found out from court documents.Dmitry Zakharchenko

He also noted that, under the current anti-corruption legislation, to pay into state revenue through a civil suit only the property which belongs to him, his spouse and his minor children.

Nikulinskiy court on December 1, 2017 fully satisfied the claim of Prosecutor General’s office on the treatment of state income arrested Zakharchenko property and cash totaling more than 9 billion rubles. It’s 27 real estate properties, including apartments and Parking space in elite areas of Moscow, four expensive cars registered to relatives Zakharchenko and other persons, gold bullion, cash in rubles and foreign currency worth about 8 billion rubles. Position Zakharchenko and other respondents is that real estate was earned by honest labor, and the origins of cash is not established. This decision was recognized by the court as legitimate.