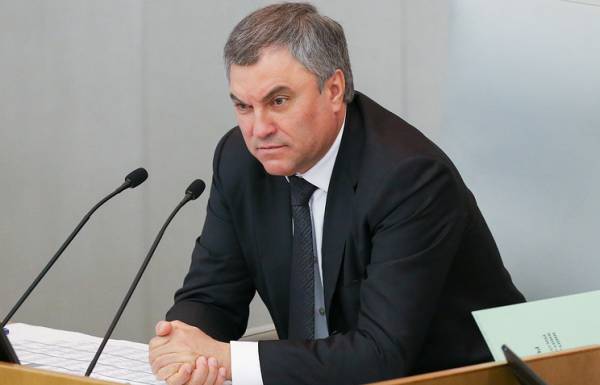 MOSCOW, April 3. /TASS/. Speaker of the state Duma Vyacheslav Volodin considers it necessary to remind politicians of Latvia about the coats, which, according to Latvian parliamentarians, “we can not let the Russian louse,” was always Russian.

Speaking on Tuesday at a plenary session during the discussion of the statement of the state Duma about inadmissibility of liquidation in Latvia of school education in the languages of national minorities, the Deputy from the Communist party faction Sergei Shargunov quoted Latvian politician, member of the Seimas Edwin Schnoor. “I quote: “If one day to let the Russian louse in the fur coat, to take it away will be difficult,” said Shargunov, thereby giving the example of relations with Russia and the Russian language in Latvia.

“We need to remind them that the coats they wore always Russian, so they need to think about what they are in these coats play the role,” responded Volodin.