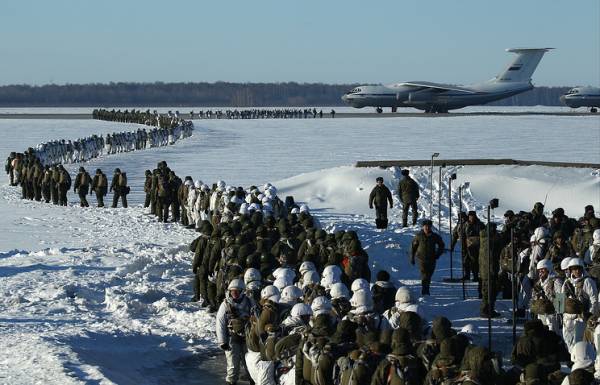 Marines go through the vast snowy field it is white-green dashed line, where the weight of each loaded weapons and parachutes of the points exceeds 100 kg. the path of the droning Ilyushin Il-76, despite the falling snow now at the slightest step to the side, the soldiers of the 106th guards airborne division done quickly and very distinctly. With turbines of the war machine side of the mechanics removed the bright red caps. The tail of the aircraft, as in most superhero movies, opened the cargo hatch and the scouts loaded into the insides of the machine.

It is in the gut. Interior of a military aircraft without the usual covering, covered wires, covered with circuits, a bright blue oxygen tanks, numerous cables makes you feel like the prophet Jonah, swallowed by a huge fish. In four rows running along the cabin, the Marines sit on folding seats. The roar of an airplane interrupt the words repeated instruction Navy officer.