MOSCOW, 4 APR — RIA Novosti. Turkey’s President Tayyip Erdogan during a joint photograph with the Russian leader Vladimir Putin, who has arrived in Ankara, “borrowed” from him standing next to the girl, reports TV channel “Zvezda”. 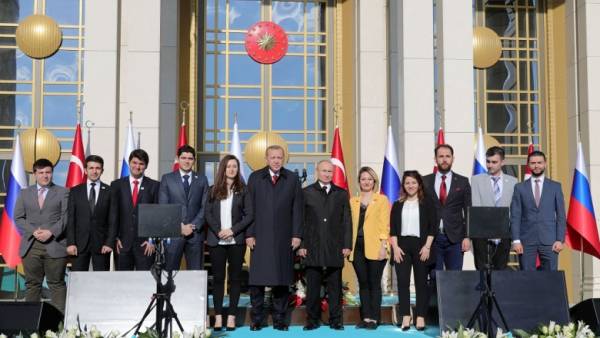 The Turkish leader before shooting, noticed that his side are only men, whereas close to Putin were just three girls. Erdogan asked one of the participants to switch sides to “balance” the photo.

A two-day visit to Ankara was the first foreign trip of the Russian leader after his victory in the presidential election. At a press conference after talks with Erdogan, Putin said that relations of Russia and Turkey there are no provocative and negative factors that could disrupt joint projects, including nuclear power plant “Akkuyu” and “Turkish stream”; according to the President, today there is nothing that would prevent the development of relations between the two countries.

Erdogan, in turn, said that Putin’s choice of Turkey as the first country for the visit shows the high level of relations between Moscow and Ankara.