In “Luzhniki” began a rally in support of Putin “For a strong Russia!”

By words a press-the Secretary of the election headquarters of the candidate, the event can take part more than 100 thousand people. 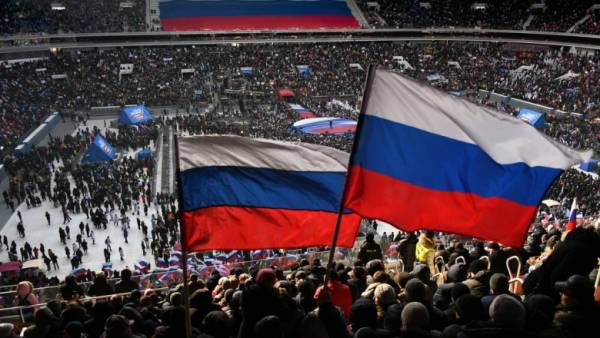 MOSCOW, March 3. /TASS/. A rally in support of a candidate for President of the Russian Federation Vladimir Putin began on Saturday at the Moscow stadium “Luzhniki”.

As reported to journalists the press-Secretary of the election headquarters of presidential candidate Andrei Kondrashov, still an hour before the official start of the campaign (14:00 GMT) gathered about 80 thousand people. “The Cup holds 100 thousand [people], now the filling of approximately 75-80 per cent,” he said. On the question of harms, in his opinion, the total number of participants 100 thousand, a spokesman replied: “more.”

The protesters filled the stands, many of them gathered on the field around the stage is adorned with the Russian tricolor. Citizens are holding posters with slogans “For our President”, “For Putin”. Waving flags of the “Young guard”, “Military brotherhood” and other organizations.

Before the event before the protesters were singer, actor and member of the musical contest “Eurovision” 2011-Alexei Vorobyov, who performed “Kalinka”. Behind him was the group “Hands up.” The audience sang along with the artists, waving flags to the beat of the music.

Earlier, Putin’s press Secretary Dmitry Peskov did not rule out the possibility that the candidate will participate in the rally.