The head of the flight of a special squad “Russia” the “cocaine business”: transport passengers, not cargo

The head of the office of the President, which includes special flight detachment (SLO) “Russia”, Alexander Kolpakov said “RIA Novosti”, the “cocaine case” in which, according to some mixed plane LAYER. 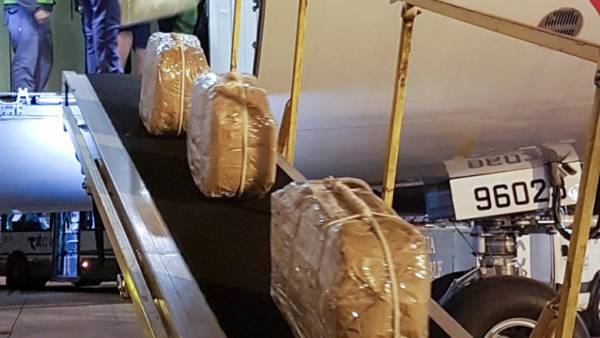 “We carry out transportation of passengers and cargo we don’t do” — he said. “What applies to the goods — there are special bodies,” said Mr. Kolpakov on the question of whether the photographs of the Argentine gendarmerie shows a plane SLO “Russia”.

26 Feb RBC noticed that published by the Argentine law enforcement pictures visible tail number — 96023. According to the publication, this number from August 2016 fixed Board SLO “Russia”.

We will remind, about the discovery of the 12 suitcases of cocaine in the school building on the territory of the Russian Embassy, it became known in mid-February. The drug was found in December 2016. Nearly 400 kg of cocaine intended for shipment to Russia. From the territory of Argentina was in charge of smuggling a Russian COP Ivan Bliznyuk and security officer of the airport Alexander Chica.

In December 2017 in the framework of the joint operation of the two countries, the suitcases were sent to Russia filled with flour. But it is not known how exactly they were taken. The cargo met a former employee of the Russian Embassy in Argentina Ali Abanov and entrepreneurs Vladimir Kalmykov and Istimer Khudzhamov. They were detained, the court then held them to 13 April. The alleged organizer of the smuggling Andrei Kovalchuk is located in Germany. He is now detained.