“The casting couch” Weinstein, a monument in Hollywood 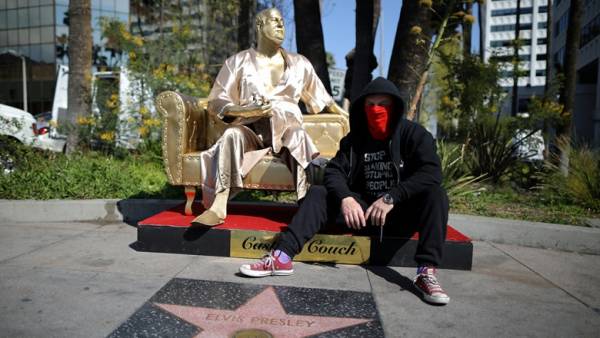 Anonymous artist Plastic Jesus, known as the Banksy of Los Angeles, set in Hollywood the monument to the “casting sofa” famous producer Harvey Weinsein, who lost his career in the film industry because of the numerous accusations of harassment. The monument was erected next to the theatre, which on March 4 will be held the ceremony of awarding the “Oscar”, and is a gilded couch, on which sits Weinstein in a Bathrobe. In his hand is a statuette “Oscar”.

Personally Winstanley thought “casting couch” [with the scandal Weinstein] gone and forgotten, but in fact it has always been part of Hollywood culture. Let’s hope that in light of recent allegations against many famous and respectable people in the industry will be “cleaning”Plastic Jesus Facebook

The artist added that the work on the monument took a total of two months. In the manufacture of “casting couch” helped him co-author, Joshua Monroe, nicknamed “Ginger”. As a model it was decided to take a friend Monroe, a figure reminiscent of Weinstein. The producer depicts realistic: the artist mentioned that it was not thought necessary to mask the flaws of his appearance.

In the run-up to the 2018 Oscars, British artist Plastic Jesus puts a statue of Harvey Weinstein, in a bathrobe on a sofa, on Hollywood Boulevard. The artist is denouncing the culture of silence that allowed the abuse to go on for so long. pic.twitter.com/UY51tgTMGm

Plastic Jesus, street artist, whose real name is unknown. “Banksy of L. A.” it became known in the U.S. media. One of his most famous works was a six-centimeter-wall mounted round star Donald trump on the walk of Fame in Hollywood in 2016. Thus Plastic Jesus with sarcasm when he suggested that the future President of the United States to build a wall with Mexico to stem the flow of illegal migrants.

Joshua Monroe, co-author of Plastic Jesus, also became famous after the installation of the provocative monument of a naked Donald trump. It was an attempt to show the true essence of the media Mogul, announced late Monroe.