Photo: the hole as the buzz and the cure for the common cold

In Russia and Poland such people are called “walrus”, in Finland “seals” and “otter,” North America “polar bears”. Photographer Dmitry Yermakov asked in Petrograd, diving under the ice in winter, why they do it. 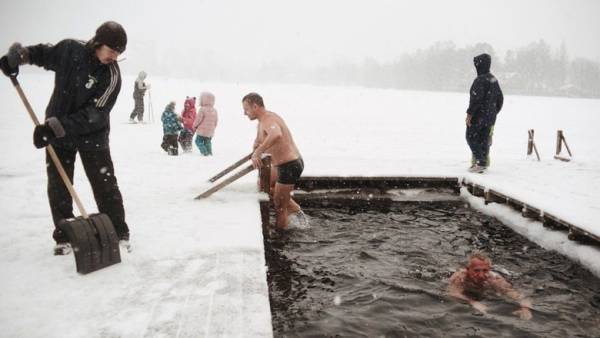 Cold to dive into an ice hole?! Cold bathing, a Russian man, apparently in blood, they have deep pagan roots.

Winter in pre-Christian Russia was considered a time of rampant evil forces, which should appease or intimidate (as, for example, in the Christmastide mummers). It is believed that the final part of the winter complex protection from evil was just swimming in the ice hole.

Most likely, they were in the course of the battle. This is indicated not only modern rodnovers and anthropologists: ancient and medieval historians also recorded this tradition on the territory of future Russia.

The Christian tradition in Russia is largely mingled with pagan, or replaced them by similarities so the new religion was easier to gain a foothold. Coincidence or not, but the mystical eve of the bathing of Jesus Christ in the river Jordan, on 19 January according to the Julian calendar that coincided with the days of pagan ritual ablutions in the hole.

However, the priests, knowing the roots of this tradition, did not allow the flock to bathe in the winter except in Holy week. However, in Russia and Finland after the bath did not stop people diving under the ice, getting from this particular “Northern” fun.

In Soviet times came new myths and old taboos had disappeared. The cult of health, especially in the prewar and postwar years, flourished. Clubs and winter swimming have opened across the country — for example, in Moscow it happened in 1965.

Other countries did not lag behind, and similar clubs appeared in different countries from USA to China, where, incidentally, a lot of fans of winter swimming.