Argentine suitcases were sent from Uruguay. Smuggling of drugs the military sides could be carried out from 2012

As it became known””, the FSB checks the information that the cocaine from Argentina was delivered to Russia in 2012. From the testimony of the former caretaker of the Russian Embassy in Buenos Aires Ali Abanova it follows that, at the request of the alleged organizer of deliveries Andrei Kovalchuk several times sent his suitcases, Packed as diplomatic mail, with the help of military transport aviation through the capital of Uruguay is Montevideo to Moscow. For each bag the caretaker, he said, received $1 thousand 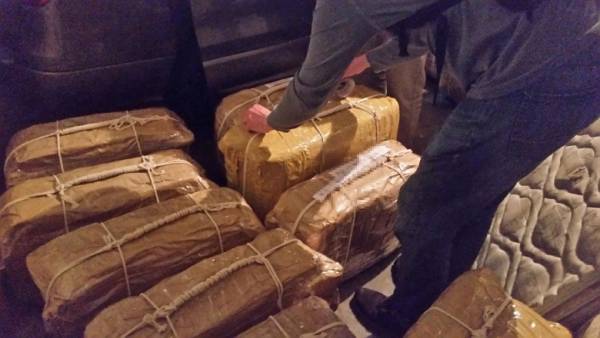 As follows from the testimony of Ali Abyanova, which he gave as a suspect the investigator of the investigation Department of the MIA, he worked as a caretaker at the Russian Embassy in Argentina since August 2011. Around mid-2012, according to him, his office phone rang Andrei Kovalchuk, with whom they soon met. Mr. Kovalchuk, having presented him with the employee of security service of the Russian Embassy in Germany (in the Embassy categorically deny it), asked to be taken to the airport of Buenos Aires.

Driving to the hotel, where he lived Andrei Kovalchuk, your Hyundai Santa Fe, the caretaker, was immersed in his stuff his new friend, among which was “very heavy suitcase, weighing 25-30 kilograms”.

When they arrived at the airport, Mr. Kovalchuk asked the caretaker to send him the suitcase later, “when will be ready the plane.” At the same time, Mr. Kovalchuk said that inside are honey wine, coffee and gifts. “Inside I didn’t look,” — said during the interrogation, Mr. Abenov believe that the suitcase 20-25 bottles of wine, “as the weight is matched”. Bringing Luggage to the Embassy, he at the command of her friend at the end of 2012 sent him “Russian cargo aircraft” from the airport of Montevideo.

History repeated itself in 2014, when, according to the testimony of Mr. Abyanova, at the request of Andrey Kovalchuk left in storage at the Embassy for two suitcase.

As before, according to the sender, the baggage was expensive wine, coffee, and biscuits. “There’s nothing criminal,” he reassured his friend Mr. Kovalchuk. However, he was asked to wrap your suitcases in a special wrapping paper, tie with twine and put the wax seal. “And usually it is Packed pouches, which is not subject to inspection,” — said the investigator, Mr. Abenov again shipped the package through the capital of Uruguay to Russia. This time, according to him, the suitcases were on Board a military transport plane.

In a similar way was packaged in 2015, even two suitcases received from Andrei Kovalchuk, who is the caretaker for a few months kept in the Embassy garage. Then we added to them ten more suitcases received, according to the suspect, from the same Mr. Kovalchuk. The latter also claimed that they coffee and products made of semi-precious stones.

All the cargo at the request of the gentlemen of Kovalchuk and Abanova one of the Embassy staff by the name of drones Packed as diplomatic mail.

All the suitcases lying in the garage of the Embassy, and in the summer of 2016, shortly before the end of his trip and returning to Russia, Mr. Abenov moved them in the back of the school. “I did not want them to interfere in garage”, — explained the defendant in the investigation.

Before leaving, the caretaker reported the suitcases to his mate Igor Rogov. With the latest Mr. Kovalchuk was going to agree, but the vigilant caretaker, as follows from the materials of the criminal case, made a check of suitcases, which were found 362 kg of cocaine. Mister of Abanov claims that he learned about the contents of Luggage after his arrest late last year.

“I thought they were taking the contraband wine, coffee and semi-precious stones,” said Mr. Abenov.

Lawyer Mr. Abenova said “Kommersant” that he did not know about this deposition of his client because he had not participated in his first interrogation. The Kommersant’s sources in the military transport aviation have confirmed that in 2012-2015 flights to Latin America, including Uruguay, were, “but were isolated”. Transportation on the sides of the suitcases with the drugs deny military.