Putin’s message to the Federal Assembly. The main thing

The theses, which will be the basis of the election program of the incumbent. 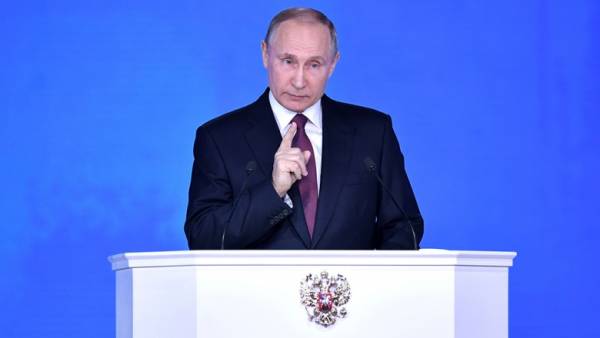 Moscow. March 1. INTERFAX.RU. On Wednesday, two and a half weeks before the presidential election, the current President of Russia Vladimir Putin addressed a message to the Federal Assembly. Annual address of the leader of the government to the Parliament is a policy document that expresses the President’s vision of strategic directions of development of Russia in the near future.

Earlier, the press Secretary of the President Dmitry Peskov confirmed that the basic ideas of development, laid down in the letter would coincide with the electoral program of the candidate of Vladimir Putin. Subsequently, they can fix in one or another legal form, perhaps in the form of decrees, as it was for the last presidential elections (the so-called “may decrees” of 2012).

The message had a pronounced social and economic character, while special emphasis was placed on the military component. Here are his main points:

— The country needs to develop, Russia is ready for a technological breakthroughto dynamic development we need to expand the space of freedom in all spheres and to strengthen the institutions of democracy. Russia needs “to be a country open to the world, new ideas and initiatives.”

— Over the next six years, it is necessary to halve the poverty level.

— Russia must be among the five largest economies in the world and to increase GDP per capita in half by mid 2020-ies. A key reference for the new government should be the rate of growth of the Russian economy above the world. Labor productivity in the economy must grow at a rate of not less than 5% per year.

— Health spending in Russia is expected to increase by half, to 5% of GDP. Need to implement a national program for the fight against cancer.

Over the next six years on measures of demographic development, protection of maternity and childhood will need to spend 3.4 trillion rubles. By the end of the next decade , the average life expectancy in Russia should exceed 80 years.

— It is necessary to develop a system of vocational education and to expand the applied baccalaureate for future engineers.