Not holding a blow: experts explained why Grudinin left the debate

MOSCOW, 1 Mar — RIA Novosti. Experts believe that the presidential candidate of the Russian Federation Pavel Grudinin is not ready to direct the debate — because they commented on his departure from the Studio in an interview with RIA Novosti. 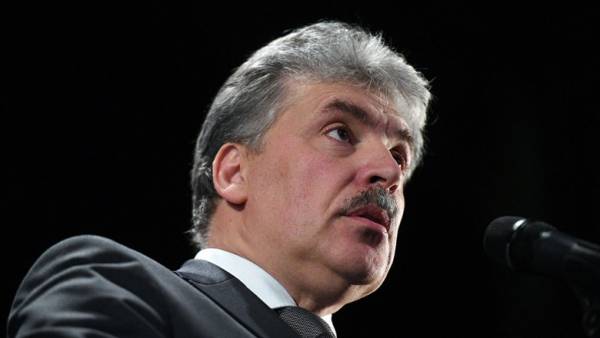 The candidate in presidents of Russia Pavel Grudinin left the Studio of the First channel, claiming that pre-election debates did show and he refuses to participate in them.

“What is happening is not a debate, it’s the market, shouts. The debate is when you argue with your opponent. Questions and answers is the interview. And why are we one hour standing here, although we have six minutes — a period in which any of the CEC and the Central channels don’t want us arguing one-on-one — made debate show and spoil the attitude of the presidential elections. These debates have no right to life, I leave the Studio,” said Grudinin in the debate on the First channel, then left the Studio.

“Obviously, there Grudinin acted like a very bad politician, that is, it is obvious that he is not ready to direct the debate. That is quite he was not ready to be asked questions about those skeletons in the closet, which he is full. All in all, it certainly looks unsightly, and as a politician, Grudinin, of course, very very lost after today’s departure,” — said the Director of the Center for political analysis Pavel Danilin.

According to political scientist Oleg Matveycheva, Grudinin decided that debate is a form of communication between candidates, while “everything happens to Grudinin someone there spoke or heard something from someone, and for voters — millions of people who are watching that’s all”.

He just ignored the voters and his position, his thoughts not told in this way. Showed that people do not hold a shot. Psychotic, neurotic, and such a person, so to speak, it is not necessary to give a black suitcase, nor button, nor the presidency.Oleg Matacawalevu

Agrees with him President of the consulting Agency Bakster-group Dmitry Gusev, who believes that Grudinin not ready for this election campaign.

“[Grudinin] not ready at all for this election campaign. Internal and proved that he is weaker than he looks, and including formally was not ready. Chickened out, there is a weakness, but you have to become a different person in order to qualify for the presidency,” said political analyst Dmitry Gusev.