New observations have drastically changed ideas about the early Universe

The first stars emerged much earlier and the matter in those days was much colder than previously thought. 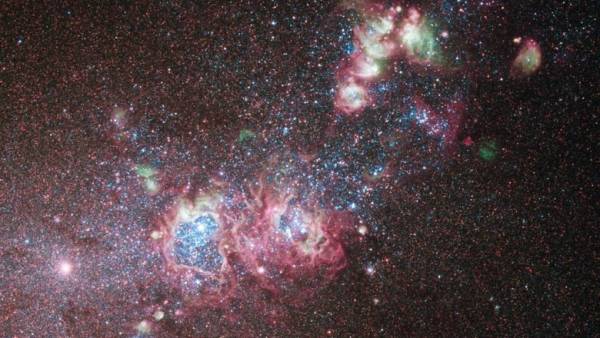 An international group of scientists using observations of the radio emission line of neutral hydrogen was discovered that the first stars appeared in the Universe within 180 million years after the Big Bang, and not through hundreds of millions of years as was thought earlier. At the moment it is not clear how the process of star formation could occur so early. In addition, it was found that the gas in the early Universe had a temperature of just 3.2 Kelvin — twice lower than previously thought. Scientists suggest that such anomalously low temperatures might be related to the effect of dark matter. Relevant articles published in the journal Nature.

Immediately after the Big Bang, the universe was filled with hot plasma that is impervious to photons and too hot for the existence of atoms and objects based on them. Through 380,000 years it had cooled enough that protons and electrons merge to began to create hydrogen atoms. Relatively recently it was thought that the formation of slow atoms and the formation of accumulations of gas that formed the stars, lasted 550 million years. It was assumed that in this period the stars were not, why it is conventionally called the “Dark ages”. After the formation of stars, their radiation ionized again before neutral hydrogen atoms, what is the “Dark ages” ended, and there was a more or less advanced state of the Universe.

As can be seen from this description, test it hard. On the border between the “Dark ages” and the secondary ionization of the light appeared the first stars had to be absorbed by the masses are still largely ionized gas. To clarify, when in fact there were first stars, astronomers in the new work analyzed the emission line of neutral hydrogen the most widespread element in the Universe.