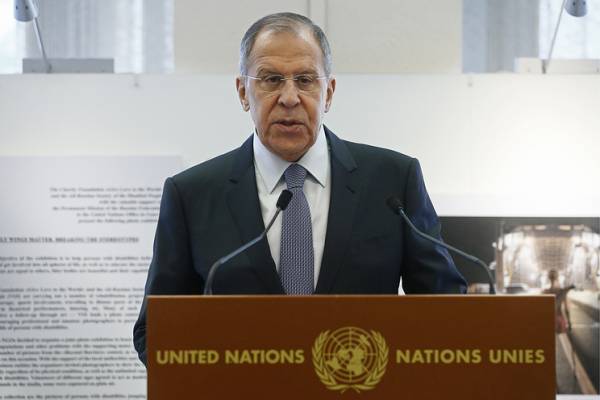 GENEVA, 1 Mar. /TASS/. The Minister of foreign Affairs of Russia Sergey Lavrov during the visit to Geneva on Wednesday took part in a session of the UN Council on human rights (HRC) and the Conference on disarmament. The leitmotif of the speeches of the foreign Minister in the Palace of Nations was a call for Western partners to abide by international law and begin truly collective work to address crisis issues.

In addition, Lavrov held several meetings on the sidelines of the conference, in particular, discussed with the special envoy of the UN Secretary General on Syria Staffan de Mistura the implementation of Security Council resolutions on the cessation of hostilities throughout the territory of Syria to provide humanitarian assistance to the population.

A lesson on human rights

Working day the Russian Minister began with a speech at the session of the HRC. Lavrov specific examples explain what happens when international law is ignored.

According to him, the allegations of violation of human rights are increasingly used by individual States as a pretext for the imposition of unilateral economic restrictions. “The HRC is also required to take a clear stand against this illegal policy, directly affecting the position of civilians”, – said the head of the foreign Ministry.