Ancient Greek papyrus told about the rescue of a kitten

The author of the papyrus, Onofri, professional and so on, drawn from the official statement in the name of epistata (government official) the village of Tunis in Fayoum oasis. In it, he describes the following events. 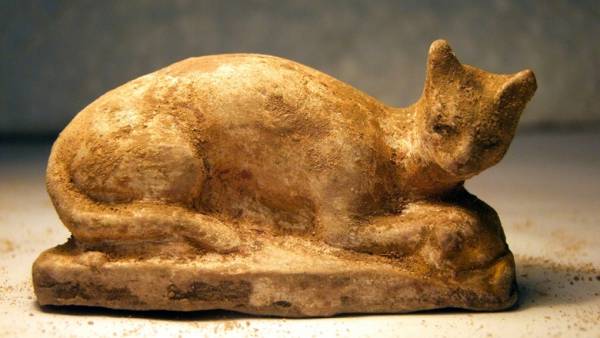 At his home born kittens, but the mother refused them. Then, Onofri tried to give them to the temple of the goddess-cats, Substaion, but it so happened that just at this time the priests were busy with other things. Onofre came back with kittens home, where they immediately took a male cat. Onofri, ran after him, calling loudly for help, and the audience barely managed to fight off one cat alive and the other apparently died. In the end, Onofri left all the kittens at the door of the temple of the living go out there and let him live, dead and mummified.

Among those who helped Onofrio to catch the cat and take away his kittens, was the village Secretary of the Fasis. Onofri, rushed to enlist his testimony, and then wrote his letter on papyrus with a report of everything that happened to epistat signed it and, apparently, so secured Andafrica from punishment for the accidental death of kittens. From the text it is clear that Onofres very concerned about and tries to make excuses.

The papyrus was written in ancient Greek and was first published at the end of 2017. The text is a date — 3rd year of the reign, probably, Ptolemy V or Ptolemy VI, i.e. 202 or 178 BC. The papyrus was purchased, along with other ancient documents which were related to the judicial debate between the embalmers and Onofrio Emeniem of Tanis and other embalmers from the neighbouring village of Philadelphia. These documents were published long ago, but the papyrus about kittens was published only now.

For scholars it was a revelation: the fact that the word αἴλουρος, “cat” was well known before, but educated him αἰλούριον, “kitty”, is attested in the Greek texts for the first time. Now this word should be included in new editions of the dictionaries of the Greek language.

The behavior of the cat, the culprit in this story, recorded in Herodotus as typical. According to the historian, the cat is killing other people’s cats, to then mate with their mother and thus make their own offspring.

Herodotus believed that if not for this behaviour is that in Ancient Egypt would have been much more cats. Herodotus also writes about the punishment for murder or manslaughter the killing of sacred animals. Even for the accidental killing of an IBIS or a Falcon in Ancient Egypt was the death penalty. And Diodorus the Sicilian reports of the later case: approximately the first century BC a Roman were lynched by an Egyptian mob for killing a cat. Obviously, Onofrio had reason to be nervous.

Where was the temple Substaion, Onofri took the kittens? Perhaps, in the village of Bubastus near Philadelphia in the Fayum. The city with the same name existed also in the Nile Delta and is described by Herodotus as the centre of worship of the goddess Bubastis on. In the XIX century in Babasteve in this town was found thousands of cat mummies and the cult of statues of cats. Recently Babestion the Ptolemaic period found also in Alexandria. Find statue of cats with dedicatory inscriptions in Greek.