The President of the United States Donald trump admitted that specially grow hair to cover the bald spot on his head. He also demonstrated his method of installation that hides the deficiency from the eyes of others. 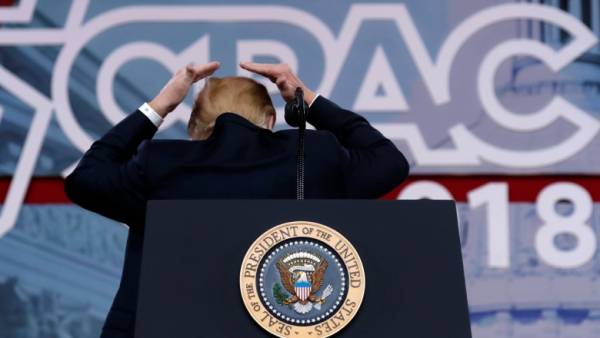 “I’m trying as I can to hide that bald spot, guys. I’m working on it struggled,” said the American leader at the conference of representatives of conservative political forces Friday, 23 February.

Trump also showed the audience exactly where on his head he doesn’t have enough hair. And he told me what to do to baldness was not visible.

Trump has the best sense of [email protected] “I try like hell to hide that bald spot, folks, I work hard at it.” #CPAC2018

In the United States more than one year and there is a joke that trump wears a wig, whenever possible, a businessman, Republican denies these rumors. In one of the shows on American television trump even allowed the host to ruffle his hair.