The us military began to prepare for the Russian winter 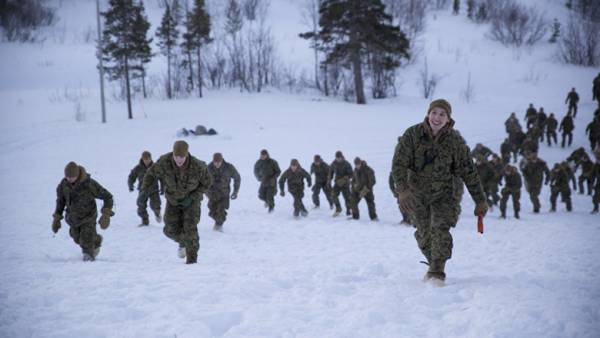 Over the past year, about 600 Marines took special training in Norway. As the newspaper notes, the military exercises try to pay attention to every detail. They learn to cope with wedging in the cold weapons, military equipment and means of communication. In addition, the Marines understand how to dress, to heat drinking water and eat to stay warm.

The last time the soldiers of the corps fought in harsh weather conditions nearly 70 years ago, in the battle of Kosinskom reservoir (1950) during the Korean war. Then the soldiers could not adapt to the cold from the cold weather killed about 7 thousand people. Now the us military fears a repeat of the situation. Potential conflict in Russia or North Korea sees them a nightmare from a tactical and logistical points of view, promises great (compared to operations in the middle East and in other regions with a mild climate), the loss of equipment and personnel, the article says.

“Training, Marines should always remember that a serious conflict in such conditions will require more from them than they ever did. They must be in optimal physical and psychological condition, they need a strong fortitude”, — quotes the portal words of the commander of General Robert Muller, who visited the Norwegian camp Marines in December of last year.

At the same time, these efforts may not be enough for superiority over the potential enemy, because the Marines can’t prepare for the winter battle in full force. In this regard, exercises in Norway there is a political subtext.