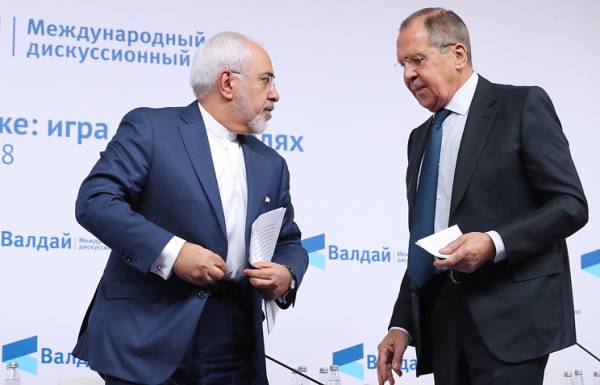 MOSCOW, February 19. /TASS/. The participants of the International discussion club “Valdai” “Russia in the middle East: a game for all fields” for the first day managed to discuss almost all the “weak points” of the region – the Syrian crisis, the situation in Yemen, the Kurdish question, the Palestinian-Israeli settlement, as well as aggravated contradictions between Israel and Iran. The opening ceremony was attended by Minister of foreign Affairs of Russia Sergey Lavrov, and his Iranian counterpart, Javad Zarif, Advisor to Syrian President Busana Shaaban and Deputy, the UN special envoy on Syria, Ramzi Ramzi Ezzeddin.

The fact that the conference is held already for the seventh time and each time collects all of the more senior guests demonstrates that Russia, thanks to its balanced policy in the region was for most countries a “universal mediator”, said the Chairman of the Board of the Fund of development and support of the club “Valdai” Andrey Bystritsky. “Russia has a reputation as a strong, independent country, it plays an important role as a mediator in the region, both politically and in practical terms, if we talk about the Syrian situation,” he explained in an interview with TASS.

To prevent the partition of Syria

The situation in Syria has predictably caused the most heated discussion, so none of the speakers failed to stay within the allotted time limit. According to the Bystritsky, it was caused by the fact that after the defeat of the “Islamic state” (banned in the Russian terrorist group”), “largely goes ointment – still trying to figure out what the configuration will continue to discuss the future of Syria.”